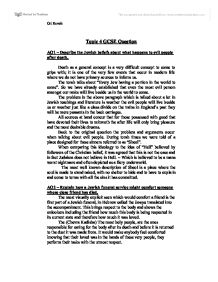 Jewish beliefs on life after death and Jewish Funerals

Topic 4 GCSE Question AO1 - Describe the Jewish beliefs about what happens to evil people after death. Death as a general concept is a very difficult concept to come to grips with; it is one of the very few events that occur in modern life where we do not have primary sources to inform us. The torah talks about "Every Jew having a portion in the world to come". So we have already established that even the most evil person amongst our ranks will live beside us in the world to come. The problem in the above paragraph which is talked about a lot in Jewish teachings and literature is weather the evil people will live beside us or weather just like a class divide on the trains in England's past they will be mere peasants in the back carriages. All sources at hand concur that for those possessed with good that have devoted their lives to mitzvoth the after life will only bring pleasure and the most desirable dreams. ...read more.

This brings respect to the body and shows the onlookers including the friend how much this body is being respected in its current state and therefore how much it was loved. The (Chevra Kadisha) The most holy people, are the ones responsible for caring for the body after its death and before it is returned to the dust it was made from. It would make anybody feel comforted knowing that their loved was in the hands of these very people, they perform their tasks with the utmost respect. A Eulogy is delivered after the burial; this reminds the friend of the accomplishments that the man has achieved and that his time on the Earth will be remembered. During the second part of the funeral, a hole is dug and the body is put in, the mourner is made to cover the grave himself, this stimulates the mourners body physically and emotionally, and combined the realisation process will begin and he will start understanding that his friend is no longer with us in this world. ...read more.

As afore mentioned it is difficult to find proof of the afterlife because we do not have primary sources to agree or disagree with its existence. The torah does specifically mention the afterlife in the form of "Sheol" and for Jews which follow the torah, this is the most textual proof they need in order to believe this. Just like most of the Jewish religion, Belief plays a huge part, and to believe in the after life is to have beliefs about Jewish ideology. The Mishna and the Gemara, Jewish book of learning do bring textual proof of their being an afterlife. In my opinion the after life does exist, because I am a believer of Jewish principles which tell you that your good deeds will be rewarded and your bad ones deducted from you, I can only believe that my actions in this world, will all be linked to the world to come and I shall receive my just deserves. ?? ?? ?? ?? Ori Raveh ...read more.