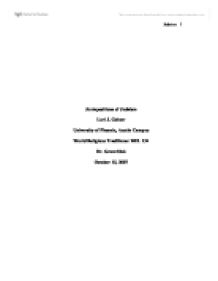 Juxtapositions of Judaism Lori J. Gainer University of Phoenix, Austin Campus World Religious Traditions / REL 134 Dr. Grant Sisk October 15, 2007 Juxtapositions of Judaism With 14 million people identifying themselves as Jewish, there exists a disparity between what being Jewish means to these 14 million individuals. This identification encompasses those who consider themselves to be Orthodox Jews; who adhere to the strictest form of the faith, Reformed Jews; who practice a less stringent form of the religion, and Secular Jews; who claim no faith or association to the religious institution of Judaism but are of Jewish decent. Yet those identifying themselves as Jews, overall appear to be a proud people of extensive history. The history of the Jewish faith and people is fraught with triumph and tragedy, heartache and heroes. From the time of Abraham throughout the longevity of this people to current time, this group of people experienced a roller coaster ride of high points and extreme lows of spiritual strength and leadership, and in relation to social and economic status and standing. The early history reveals a journey from freedom to slavery and back to slavery again, on multiple occasions; success in building a temple of worship only to see the temple destroyed, rebuilt and destroyed; and the rise of a prosperous nation falling to the dredges of living in ghettos. ...read more.

Because the people of Israel were numerous, and to prevent them from overpowering the Egyptians, the ruling pharaoh ordered that these people be put into bondage and used as laborers for building large construction projects. As slaves, the Israelites made bricks from mud and straw, and worked diligently in return for their lives. The faithful longed for a day when their promised messiah would bring them out of slavery and deliver them into the promised land. Many prophets came and went, and the people believed and waited. After many generations of Jews lived in slavery in Egypt, the nation of Israel was delivered from the rule of pharaoh and released. However, this was not to be the end of Israel's bondage. The nation of Israel lived under the rule of many kings over many years. King David and King Solomon were two of the more noteworthy. It was during the reign of King Solomon that the first temple was completed in 825 B.C.E. This temple was destroyed in the year 422 B.C.E. by the Babylonians, and it was not until the year 352 B.C.E. that construction of a new temple started. ...read more.

It was the belief of Hitler that Germany would never regain its former strength and status until all Jews were stripped of their possessions in Germany or eradicated from the country. This included the death of millions inside the established camps for the purpose of 'racial hygiene'. With such a tumultuous history of bondage, destruction, being scattered, reassembling, and being exiled; few would expect the Jewish faith or anyone claiming to be a Jew to be in existence today. Yet according to Adherents.com, an organization which has amassed nearly 43,900 statistics and religious adherents for almost 4200 religions, churches, denominations and religious bodies, there currently exist 14 million individuals who identify as Jewish (Unknown, n.d.). While this identification includes devout Orthodox Jews and Reformed Jews; who are identified as such based on their manner of faith practice, this number also includes those who merely acknowledge that they are of Jewish heritage. For a nation of people, who have not been identified as being antagonistic or aggressive, this group of people has experienced a plethora of rise-and-fall eras throughout its history, which has nearly resulted in the extinction of these people called the Children of Israel, and the faithful followers of the Jewish faith. ...read more.