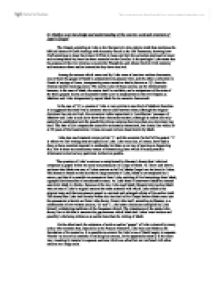 (a) Outline your knowledge and understanding of the sources used and structure of Luke's Gospel The Gospel according to Luke is the first part of a two-volume work that continues the biblical history of God's dealings with humanity found in the Old Testament, showing how God's promises to Israel have been fulfilled in Jesus and how the salvation promised to Israel and accomplished by Jesus has been extended to the Gentiles. In the prologue Luke states that his purpose of the two volumes is to provide Theophilus and others like him with certainty and assurance about earlier instruction they have received. Among the sources which were used by Luke were at least two written documents, one of them the gospel of Mark in substantially its present form, and the other a collection in Greek of sayings of Jesus, incorporating some narrative details; known as 'Q'; from the German Quelle meaning source. The use by Luke of these sources can be demonstrated because, in the case of Mark, the source itself is available, and a comparison of the texts of the three gospels leaves no reasonable doubt as to its employment in the two Gospels as Matthew and Luke independently copied Mark for its narrative framework. In the case of 'Q'; a quarter of Luke is very similar to one third of Matthew therefore it is suggested that there was a common source used between them, although the original document has not survived, the occasional verbal agreement in 'non-Marcan' passages of Matthew and Luke ...read more.

This is thought to be true as Lukes source are most certainly Palestinian. Luke therefore had to adapt the style, culture and theology of these sources so that they suited his audience; which were many Gentiles living outside of Palestine and his purpose. This process is known as redaction. This explanation fits in with Luke's rather cavalier treatment of Mark as a whole. He treats the general framework of Mark with respect, and preserves, with some significant exceptions, his order, but whether he is fitting Mark into Proto-Luke or not, he does not hesitate to omit Mark's stories and sayings when he has what he considers a better version. There are different structures that Lukes Gospel is argued to have. The first is a simple thematic structure. This states that the Gospel of Luke is organized into seven primary sections that describe the life, ministry and miracles of Jesus Christ. The first section begins with a prologue that explains the purpose of this Gospel. The second section, describes the events surrounding the coming of Jesus Christ and John the Baptist. This section describes the birth of Jesus and some events of His childhood. The third section details the events leading to the public ministry of Jesus. The fourth section of Luke's Gospel describes the ministry in Galilee including many lessons and teachings of Jesus that are principles for living according to God's way of life. ...read more.

All history is recalled with a bias Luke therefore selected relevant material to suit his purpose which was to teach about the life of Jesus and to show that through history God has offered all people the chance of salvation. Luke therefore needs to use history to show exactly how God offered salvation through the Old Testament, the life of Jesus and through the life of the church. The historical detail in Luke is thus an aid to the overall aim; history is used so that the audience can be certain of what they are reading. Since the aim is theological the gospel will not be an exact 'orderly account' of the Good news as historical accuracies becomes subordinate to the overall purpose. There are scholars; such as Dibelius who say Luke's history is so inaccurate to the extent that he makes up stories to fit his theological purpose. However Luke's interest in history is so only that he can enhance, clarify or strengthen his theology It was believed that something had to be chronological in order to be historical; however Hellenistic recognises that just because something isn't chronological doesn't mean it isn't historical. The Rabbis went even further and said that scripture doesn't need to be chronological in order to be historical. In conclusion Luke is a theological historian. History and theology are linked. But at times Luke teaches theology at expense of chronology and this means symbolic alteration therefore, times dates and places are changed but as the events aren't changed this is acceptable and the Gospel isn't any less historical or any more wrong. ...read more.