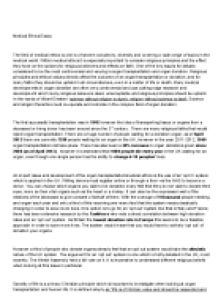 ﻿Medical Ethics Essay The field of medical ethics is one is of severe complexity, diversity and covering a wide range of topics in the medical world. Within medical ethics it is especially important to consider religious principles and the effect they have on the options for religious believers and effects on faith. One of the key issues for debate, considered to be the most controversial and varying is organ transplantation and organ donation. Religious principles and ethical values directly affect the outcome of an organ transplantation or donation, and for many faiths they should be upheld in all circumstances, even in a matter of life or death. Many medical developments in organ donation are often very controversial and use cutting edge research and development which many religious believers deem unacceptable and religious principles should be upheld. In the words of Albert Einstein ?science without religion is dumb, religion without science is deaf?. Science and religion therefore must co-operate and coincide in the complex field of organ donation. The first successful transplantation was in 1945 however the idea of transporting tissue or organs from a deceased or living donor has been around since the 3rd century. There are many religious faiths that would reject organ transplantation. There are a huge number of people waiting for a donation organ, as of April 2012 there are currently 7288 people waiting for an organ in the UK, however in the year 2011-2012, 3960 organ transplantation did take place. There has also been a 50% increase in organ donations given since 2008 (as of April 2013) , however it is estimated that 1000 people die every year in the UK waiting for an organ, even though one single person has the ability to change 6-10 peoples? lives. An import issue and development of the organ transplantation/medical ethics is the use of an ?opt in? system which is applied in the UK. ...read more.

Singer objects to the Christian view as a crime of Specimim as it would discriminate against animals, and ultimately we should not be ?set apart?. On a scientific level it has been proven that humans and chimpanzees share 98% of their DNA with one another. How can we be set apart from something so like ourselves? However to agree with Locke?s principle would denounce babies and people with Alzheimer?s. It would therefore important to define what a person as opposed to a non-person. E.E.Cummings backs this view by stating that ?un-being dead is not being alive? and that some people are not worthy of people called a person, such as those in prisons. Under personhood the idea of xenotransplantation ? the transplantation of animal organs to humans would be rejected as animals are just as much ?persons? as human beings. Moreover this would pose another religious opponent of Hinduism, which sees the cow as sacred. Moreover this is applied to organ donation in the sense that do we prioritise those who are classes as a person over that of a ?non person and if someone is indeed classed as a non-person can we freely take their organs without their consent? Singer believes that ?killing a person is far worse than killing a non-person?, which means that he, discriminates on the grounds of brain function and mental ability. If this was applied to organ donation then babies organs could freely be removed in order to save some that is a classed as person. This would intern over time limit the earth?s reproduction. Another thing to consider it with personhood is when does a person stop beaming a person, is it when they loose consciousness or when they are completely brain dead and cease to function. Singer said that a person stops being a person when consciousness is lost but how would we be able to predict if that person would later regain consciousness, we cannot ever predict the outcome of a situation. ...read more.

It supports the idea that humans should not be treated as ?a means to and end? and that all human life is scared and special which should be treated with respect, this coincides with some aspects of sanctity of life. Kant developed the theory of universalisability, the idea that if an idea can be universalised then it is deemed good. Kantian ethics is more based on the individuals personal opinion, rather than as a suggestion on the opt in opt out system. In conclusion the objection for the opt out system is essentially, if this system was implemented many organs may be removed without consent or respect. In India especially there is a high rate of organs which do not need to be used, being sold on the black market (although there were laws passed in the 1980s in an attempt to stop this). This then violates their civil liberties and the principles for respect for autonomy. It can be argued that although removing organs from someone who does not want them removed is unfortunate they do indeed have the option to opt out and it?s for the greater good. Many of the ethical theories attempt to divulge the developments of organ donation system in the UK, especially personhood and sanctity of life which I find to be extremely powerful in the argument of opt in opt out. However many fail to take in the patients autonomy. Organs as part of the body which we should have the choice over.to implement an opt out system restricts their autonomy greatly which should be a civil liberty. Therefore in my opinion the autonomy of a person is the most important thing when considering the new developments for organ donation. A person should have freedom of choice to opt in; it should not be a requirement. The principle of autonomy accepts that everyone person has the right to choose which is what I believe. In the end ?it?s all a matter of personal choice? (Paul Davis) whether you want to donate your organs and the government have no right to make it compulsory. ...read more.