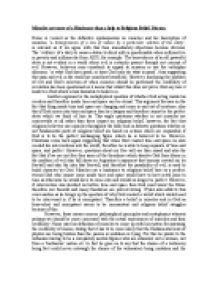 Miracles are more of a Hindrance than a help to Religious Belief. Discuss.

﻿Miracles are more of a Hindrance than a help to Religious Belief. Discuss. Hume is viewed as the definitive spokesperson on miracles and his description of miracles, ?a transgression of a law of nature by a particular volition of the Deity?, is relevant as if we agree with this then immediately objections become obvious. The ?volition? of a deity to cause a statue to drink milk is questionable when millions live in poverty and millions die from AIDS, for example. The benevolence of an all powerful deity is not evident in a world where evil is certainly present through out concept of evil. However, believers may comeback to appeal to mystery or use the euthyphro dilemma, ?is what God does good, or does God only do what is good?, thus suggesting that pain and evil in the world are somehow beneficial. However, analyzing the problem of evil and God?s selection of when miracles should be performed the credibility of revelation has been questioned as it seems that whilst this does not prove God any less it leads to a God which is less desirable to believe in. ...read more.

Wyles also adds to this conversation as he brings up the question of why God created a world which would need to be intervened in if he is omnipotent. Therefore a belief in miracles and in God as benevolent and omnipotent seems to be inconsistent and religious belief struggles because of this. However, these issues concern philosophical principles and metaphysics whereas perhaps we should be more concerned with the actual experiences of miracles and their credibility. Hume uses his definition of miracles to come up with his system for assessing the credibility of claims, stating that it has to be more likely that the fundamental laws of physics are being broken than the person is mistaken or lying. For this he points to the witnesses having to be a completely neutral figures who are educated, not a women, not from a ?barbarous? nation etc. In fact he goes on to say that the chance of a testimony being fact could never outweigh the chance of the witness(es) being mistaken and the laws of nature being upheld. Therefore Hume?s objection lies in his belief in the concrete stature of the laws of nature, this is damaging to religious belief as it points out the fact that potentially science could explain every instance where a miracle has seemed to occur. ...read more.

However, although there then seems to be scope, using Swinburne and Ockham, to take experience seriously we have to look at this evidence and see that conflicting claims seem to conclude this subject with miracles as a hindrance to religious belief. As religious experience is a type of miracle the conflicting messages and different religions which these experiences come from seem to sully the reputation of miracles and therefore religion. Also miracles which cause or ask for the saving of human life conflict with those such as the story of Joshua which allows for murders to occur. Although mystery may still be alluded to as an explanation the conflicting nature of different miracles seems to discredit their influence upon religious belief. Aquinas classifies miracles as ?Those things?which are done by Divine power apart from the order generally followed in things?. Whilst this agrees with Hume?s definition that miracles are ?a transgression of a law of nature by a particular volition of the Deity?. However, Aquinas allows for the laws of physics to be maintained whilst miracles are occurring, for example, a loose bolt in a plane could be tightened without God having ...read more.