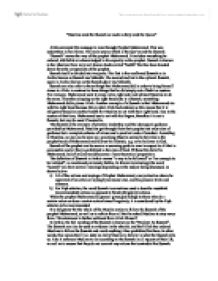 &quot;Muslims need the Sunnah as much as they need the Quran&quot; Allah conveyed His message to man through Prophet Muhammad. This was undertaken in two forms

"Muslims need the Sunnah as much as they need the Quran" Allah conveyed His message to man through Prophet Muhammad. This was undertaken in two forms. The main source which is the Qur'an and the Sunnah. "Sunnah" means the way of the prophet Muhammad. It includes everything he ordered, did forbid or acknowledged in his capacity as the prophet. Sunnah is known to the Muslims from very well known books called "hadith" that has been handed down from the companions of the prophet. Sunnah itself is divided into two parts. The first is the confirmed Sunnah or in Arabic known as Sunnah mu'akkadah. The second and last is the optional Sunnah, again in Arabic known as the Sunnah ghair mu'akkadah. Sunnah can also refer to those things that Muhammad did in order to bring himself closer to Allah, in contrast to those things that he did simply out of habit or custom. For example, Muhammad went to sleep on his right side and advised Muslims to do the same. Therefore sleeping on the right hand side is a Sunnah, something Muhammad did to please Allah. Another example of a Sunnah is that Muhammad ate with his right hand because this is what Allah had ordered, so this means that it is obligatory based on another hadith for Muslims to eat with their right hand. ...read more.

In other words, this means that it is a duty on every Muslim to believe in what the Sunnah tells us. Also it enforces Muslims to act according to the Sunnah in all aspects of their life, as well as to ensure that they do not commit any actions that contradict the Sunnah. The Qur'an is the last book of Allah sent for the guidance of humanity through the last prophet, Muhammad. The Qur'an according to the Muslims is considered to be the eternal miracle of Islam. It is the complete guide for Muslims living one's life and seeking Allah's pleasure. To the Muslims, the Qur'an provides rules and regulations that create proper relations between man and Allah and man and man. It leads the Muslims to understand their role in this world, encourages them to think and ponder, and guides them in the usage of natural resources. Muslims say that the Qur'an enlightens man soul, purifies his morals, and condemns all wrong, orders good deeds and calls for the establishment of justice and fraternity through obeying Allah as the The Qur'an itself was given to Muslims in a chain from Allah to the angel Jibrael (Gabriel) to the prophet Muhammad. The message was given to the prophet in pieces over a period spanning approximately twenty three years. ...read more.

The second leg is the Sunnah of the prophet. The Qur'an and the sunnah are different primarily due to its form. Unlike the Sunnah, the Qur'an is quite literally the word of Allah, whereas the Sunnah is inspired by Allah but the wording and action are of the prophets. The Sunnah's place in relation to the Qur'an can be divided into three parts. The first part is known as the "confirming sunnah". This is the par of the Sunnah that confirms what is in the Qur'an and reinforces it. The second part is known as the "Explanatory sunnah". This part of the Sunnah explains the Holy Qur'an and the various Shariah injunctions that come in the Holy Qur'an. It includes four parts: expanding on what is mentioned only briefly in the Holy Qur'an, explaining difficult verses or issues, putting limits on general statements in the Qur'an and finally specifying generalities in the Qur'an. The third part is known as the "Sunnah that brings new legislation". That part of the Sunnah is the one that brings new legislation and new shariah that is not in the Holy Qur'an. Sunnah establishes the framework for the Muslim praxis and also for reading the Qur'an, since the prophet's life is deemed the best exegesis of its teachings, hence the aphorism that "the Qur'an has more need of the sunnah than the Sunnah has of the quran." ...read more.