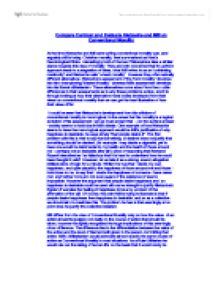 Nietzsche and Mill on Conventional Morality

Compare Contrast and Evaluate Nietzsche and Mill on Conventional Morality At the time Nietzsche and Mill were writing conventional morality was, and arguably still is today, Christian morality, best summarised as Kant's Deontological Ethics. Interestingly both of the two Philosophers take a similar stance towards this view of morality. They are both concerned that it's uniform approach leads to a stagnation of ideas, what Mill refers to as an "unthinking mediocrity" and Nietzsche calls "a herd morality". However they offer radically different alternatives, Nietzsche's assessment of the 'herd morality' develops into him championing 'Master Morality', whereas Mill's assessment develops into his liberal utilitarianism. These alternatives come about from the subtle differences in their assessments as to why these problems evolve, and it is through looking at how their alternative moral codes developed from their views on conventional morality that we can get the best illustration of how their views differ. It could be seen that Nietzsche's development from his criticism of conventional morality is more logical, in the sense that his morality is a logical evolution of his assessment, yet we must accept that - on the surface at least - society seems to hold closer Mill's ideals. One example of how Nietzsche seems to have the more logical approach would be Mill's justification of why happiness is desirable, he says simply "that people desire it". The first problem with this is that to say that something is desired does not justify that something should be desired, (for example I may desire a cigarette, yet to have one would be detrimental to my health and the health of those around me - perhaps not so desirable after all!) a line of reasoning that Bertrand Russell described as "so fallacious that it is hard to understand how he could have thought it valid". However, let us take it as a strong, sound, altogether brilliant piece of logic for a minute. ...read more.

The best way to illustrate this is by assuming for a second that their positions had been reversed, and it was in fact the lamb that hat had killed the bird of prey, and the slave that was exploiting the master. Whilst it is still true to say that 'the lamb kills the bird of prey' to say that 'the slave exploits the master' is fundamentally wrong. As soon as the slave is exploiting the master the slave is no longer slave but master, and likewise the master is now the slave. Nietzsche may argue that it would be as impossible for the slave to exploit the master as it would be for the lamb to kill the bird of prey, and whilst this may be so, it is not, as he would have it, because the slave is necessarily too weak, but because as soon as he does so he ceases to be a slave. However whilst his linguistic argument against the blame that conventional morality prescribes may have some flaws, his look at the genealogy of the moral codes themselves is far harder to criticise. Nietzsche believed that any moral idea has a history behind it, and that this in itself undermines the application of them. Good, he argues was once a word used by the noble, ruling caste to distinguish themselves from the common masses. He argues that they used it to denote all that they saw as distinguishing themselves from these masses - strength, nobility, power. However the masses, realising they could never achieve these qualities, instead took the word and gave it a new meaning, precisely the opposite of what the word had originally meant - humility, kindness, pity. Nietzsche believed that the implications of this where that the idea of good held no constant value, and could therefore be rejected. It is very hard to argue against this using the same brutal logic that he does, however, one could regard the changing meaning of the word not to signify that it holds no value but rather that it is an ever evolving idea. ...read more.

Nietzsche makes the stronger logical arguments. He is brutal in his assessment of conventional morality, boiling it down to its origins, destroying these origins and then leaving himself with the position he goes onto champion - master morality. Whether or not you believe this position to be correct it is hard not to admire the calculated precision with which Nietzsche has reached his conclusion. However, his perspectivist viewpoint is both his greatest strength and greatest weakness. On one hand it allows him to dismiss any attempts at attacking his ideas. If I see something differently to Nietzsche, he can simply make the argument that the reason for this is simply that I am weak and therefore see things from a slaves perspective, which makes his position virtually unfaulsifiable. On the other hand the very nature of his perspectivist deconstruction of conventional morality leaves him with a conclusion that is just as much a perspective as conventional morality, and therefore subject to almost exactly the same deconstruction through origin. Mill's rule utilitarianism is considerably less beautiful in terms of the strength of the logic behind it, to the extent that sometimes it is difficult even to work out what point he is trying to make. However, if we accept both the premise that all are born equal and that happiness is an end in itself, (two things that Mill failed to adequately justify) then there is no denying that a utilitarian world would be the best possible world. In addition, whilst Mill fails in actually justifying these things I believe there is a case to be made to say that they are true. For example, on an evolutionary level it must be accepted that as we all started 'life' as a single, unconscious cell, in which there would be absolutely no way to differentiate between any one of us, we must accept that any hierarchy of value is therefore not natural, but imposed. For this reason, although utilitarianism is considered a joke amongst many philosophers, Mill in fact still has as much relevance today as he did when he was writing. ...read more.