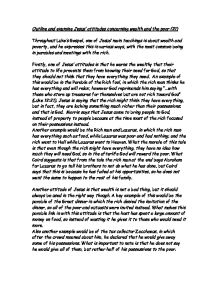 Outline and examine Jesus attitudes concerning wealth and the poor. To what extent do these teachings depart from Judaism?

Outline and examine Jesus' attitudes concerning wealth and the poor (21) Throughout Luke's Gospel, one of Jesus' main teachings is about wealth and poverty, and he expresses this in various ways, with the most common being in parables and meetings with the rich. Firstly, one of Jesus' attitudes is that he warns the wealthy that their attitude to life prevents them from knowing their need for God, so that they should not think that they have everything they need. An example of this would be in the Parable of the Rich fool, in which the rich man thinks he has everything and will relax, however God reprimands him saying "...with those who store up treasures for themselves but are not rich toward God" (Luke 12:21). Jesus is saying that the rich might think they have everything, but in fact, they are lacking something much richer than their possessions; and that is God. Morris says that Jesus came to bring people to God, instead of property to people because at the time most of the rich focused on their possessions instead. Another example would be the Rich man and Lazarus, in which the rich man has everything such as food, while Lazarus was poor and had nothing; and the rich went to h**l while Lazarus went to Heaven. What the morale of this tale is that even though the rich might have everything, they have no idea how much they will need God, so in the afterlife God will reward the poor. ...read more.

According to Tannehill, he suggests that the wealth makes the Pharisees uncaring about God, as they see their wealth almost as an idol in a sense, which God also considered as an abomination. Another attitude of Jesus' is that he warned that wealth was a way of preventing people from entering God's kingdom, and to achieve salvation the rich had to give up all the possessions. The best example to show this is the Rich Man and Lazarus, as there is a clear example of role reversal here, as instead of the rich man going to heaven, he is instead sent to h**l, because according to Caird, he failed to use his opportunities of giving Lazarus some of his wealth, so this meant he didn't achieve salvation with God. Another example would be in Luke 12:30, as Jesus tells his followers, as well to the rich, that God knows that everyone needs him, so in order to be grant entry into his kingdom you have to sell all that you own and give to those who need it more than you do. What is an interesting note is that Morris points out that Jesus tells everyone not to worry about their possessions, as worrying is a great inhibitor of life if you do so. An interesting teaching Jesus expresses is that the poor will receive spiritual blessings from God, and the best example of this is from Jesus' Sermon on the Plain, from The Woes part. ...read more.

be speaking on God's behalf by saying that the God wanted them to give up all their wealth, and this was considered blasphemy that would of caused more chaos. An interesting point that could be raised is that Jesus was also challenging that faith of the wealth as well, because even they called themselves pious, they always seemed to place their wealth above God no matter what, so this would of caused outrage as the Saducee for example would not believe this at all. However you can also see that Jesus does in fact follow Judaism carefully as well, as when Jesus says in his reading "...the year of the Lord's favour"; it is actually saying that in Isaiah's context, he is referring to the Jubilee year. According to Tannehill, under Mosaic Law, property is to revert to its original owners and servants were to be released, this meant that he was sticking to the Old Testament teachings, which were valued highly off in Jesus days. Also Jesus came to Earth to help spread the word of God to everyone, which included the rich, so he was the messiah that was spoken about by Isaiah, so this would of fitted in with old testament teachings. An interesting point is that in today's society, many modern Christians didn't disagree with what Jesus said, but they thought that instead nothing was wrong with acquiring money and wealth, as in today's society, people who do become wealthy are often admired by others. ...read more.