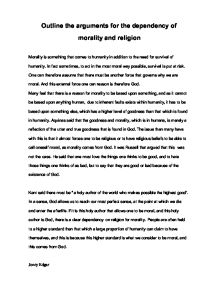 Outline the arguments for the dependency of morality and religion

Outline the arguments for the dependency of morality and religion Morality is something that comes to humanity in addition to the need for survival of humanity. In fact sometimes, to act in the most moral way possible, survival is put at risk. One can therefore assume that there must be another force that governs why we are moral. And this external force one can reason is therefore God. Many feel that there is a reason for morality to be based upon something, and as it cannot be based upon anything human, due to inherent faults exists within humanity, it has to be based upon something else, which has a higher level of goodness than that which is found in humanity. Aquinas said that the goodness and morality, which is in humans, is merely a reflection of the utter and true goodness that is found in God. The issue than many have with this is that it almost forces one to be religious or to have religious beliefs to be able to call oneself moral, as morality comes from God. It was Russell that argued that this was not the case. He said that one must love the things one thinks to be good, and to hate those things one thinks of as bad, but to say that they are good or bad because of the existence of God. ...read more.

Religious institution put foreword some strong moral stances, such as that which the Catholic Church puts forward in regard to the use on condoms. All that happens is that in these cases, the Church gives a moral absolute. And yet one never hears about someone that does not believe in God give this opinion, even though purely by process of elimination, there must be some people that don't believe in God but think that using a condom is wrong. No. What religion does is give is moral absolutes when no other body will. As a whole humanity knows these things to be self evident and yet for a lot of the time, it would rather bury its' collective head in the sand and live in a world where what can happen should happen. People often say that morality and religion should not be linked because God cannot create morality. If Goodness is an independent entity, and God commands thing because they are good, irrespective of if it is what he wants, He cannot bring goodness into being apart from the goodness that he can access from outside himself and is therefore not all power full. A God who decides what moral and is the source of all morality can therefore create a command to do something that is intrinsically wrong, but because he has decided that it a good thing to do morally, it becomes so. ...read more.

Humans find the faults that are found with morality and religion being dependent upon each other, but neither morality nor religion comes from humans, so the faults are human faults and not faults with morality and religion, as they come to us from God. If as Aquinas said, the goodness that is in humans is merely a reflection of the total and utter goodness that is God, how can any question if God would ever command something to be immoral? Yes, God is Omnipotent and so could command a bad thing be considered good, but what people seem to forget is that he is also all loving and so would never do this. Nor would he ever need to because he is Omniscience. the point that we all feel a moral sense, both theist and atheist, despite a confirmed root of morality does give the sense that our morality is not necessarily our own, shows that it is a reflection of the truer goodness the comes to us from and through God. While a link between morality and religion is not clearly needed, there is a sense that to have one gives a deeper sense of the other. Morality and religion should, therefore, be reflections of each other. They can be separate, but that does not mean that they cannot be the same in substance. Jonty Edgar 3 Jonty Edgar ...read more.