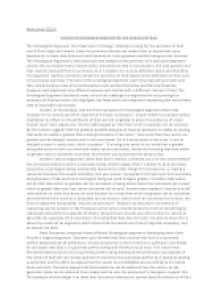 Outline the Ontological Argument for the existence of God.

A statement is analytically true if the clauses or predicates within the statement say something necessarily true of all instances of the subject and Descartes maintained existence belonged analytically to God as three angles were analytically predicated of a triangle. The Ontological argument also faces many criticisms by different philosophers for not proving the existence of God. Gaunilo was one of the first philosophers to criticize Anselm?s theory using his ?island? theory. Gaunilo asked people to conceive an island ??more excellent than any other island?? and he suggest that this island according to Anselm?s proof must necessarily exist because an island which exists in reality would be much greater than one purely in our minds. Although Gaunilo?s argument does not directly highlight a flaw it does however show the same logic of Anselm?s argument can be applied to other non-accepted arguments. Anselm responded to this by explaining that only arguments of necessary existence can be applied to the ??that than which no greater can be conceived? theory and the island theory is a contingent object and therefore can always be improved therefore never reaching a state of perfection. Anselm then dismissed any criticisms that did not relate to a necessary existence. Gaunilo went on to further criticize Anselms argument by putting forward the concept that the notion of God cannot be conceived, he goes onto explain that atheists would not accept that God can be fully understood or grasped and therefore humans cannot fully conceive God. ...read more.