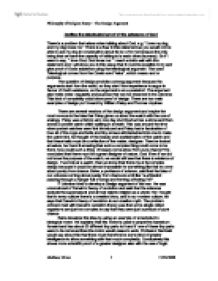 Outline the teleological proof of the existence of God

Outline the teleological proof of the existence of God There is a problem that arises when talking about God, e.g. "I love my dog, and my dog loves me." There is a flaw in this statement as you would not be able to ask my dog in conversation about its love for me because the only being that we have the capacity of talking to is each other (humans). So if I were to say, "I love God, God loves me." I reach a brick wall with this statement and I will show you in this essay that it could be possible to try and give proof of God's existence using the teleological argument. The word Teleological comes from the Greek word "telos", which means end or purpose. The question of design provides a strong argument because the arguments start from the world, so they start from experience to argue in favour of God's existence, so the argument is an a posteriori. The argument also holds order, regularity and purpose that can be observed in the universe. This kind of complexity could show proof of design. There are two main examples of design put forward by William Paley and Thomas Aquinas. ...read more.

The question of design seems to cohere with our everyday life and experiences of the world and universe. It is, as Conway Morris (atheist) puts very fittingly, "evolution is almost eerily well suited", which would pose a question to weather everything is just a product of chance or there is structure to everything. Design seems to fit in quite well with science in this case because it has been scientists such as Behe and Dembski that have discovered the amazing complexity of evolution. Do the strengths outweigh the weaknesses of the argument? One of the greatest weaknesses of the teleological argument is that fact that Paley uses analogy to explain the proof of God. He makes it unclear if he refers to the whole universe when talking about the watch, or just very small aspects of it. Hume says that when talking about the universe, you would have to look at the universe as a whole, outside of it. Also we don't know of any other universes so we don't know how a universe would be designed and concludes that you cant make a leap of logic from how it would be designed to the universe's actuality. ...read more.

If Richard Dawkins were to be asked by a critique of his work, like Paley for instance, he would say "A mystery? Maybe, but we just have to work on it!" This is a similar statement to Conway Morris and is another unsatisfying answer for a question that these scientists are so sure is correct. Hume has made many criticisms but they seem to be flawed in some ways. He says that we should compare the universe to something like an animal but an argument could be made that the universe is not like an animal but something far greater. He said that if we cant see something then it isn't worth talking about. He then is almost inferring that there is chance of design, which could contradict his argument greatly. I think that given all this evidence for and against God and the Design argument, they must all be considered before a decision should be made. Paley and Aquinas present the argument very skilfully but its flaws are exploited by the likes of Mill, Darwin, Dawkins and Hume. I can't say that the strengths outweigh the weaknesses because they balance each other out too much to make a valid judgement. Philosophy of Religion Essay - The Design Argument Matthew Oliver 1 17/05/2008 ...read more.