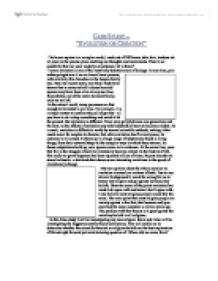 CASE STUDY - "EVOLUTION OR CREATION" The h**o sapiens is a complex model, made out of 200 bones, skin, hair, tendons etc all place in the precise place enabling our thoughts and movements. There's no possibility that we were made by coincidence. Or is there? Human evolution is one of the most hotly debated areas of biology. At one time, pale anthropologist saw it as an almost linear process, with relatively few branches in the human family tree. But over recent years, new fossil finds have shown that as many as half a dozen hominid species may have been alive at any one time. Remarkably, out of the entire hominid family, only we are left. In the natural world, many processes are fast enough to be tested in real time. For example, it is a simple matter to confirm the pull of gravity - all you have to do is drop something and watch it hit the ground. But evolution is different. Years may go by between one generation and the next, so the effects of evolution may take hundreds of years to become evident. As a result, evolution is difficult to verify by normal scientific methods, making it that much easier for sceptics to dismiss. But while evolution itself is rarely seen, its outcome is all around. It shows up in a huge range of adaptations found in living things, from their outward shape to the complex ways in which they interact. As theses adaptations build up, new species come in to existence. At the same time, ones that fail in the struggle of survival eventually become extinct. In the history of life, this cradle-to-grave sequence has been repeated million of times. Its past records are stored in fossils- a data bank that shows some interesting variations in the speed of evolutionary change. My own opinion about the whole creation vs. evolution is actually a mixture of both. ...read more.

messenger and the book He has sent down on His messenger and the Book which He sent down before, Who so disbelieves in God and His angels, and His Books, and His Messengers and the Last Day, Has surely gone astray into far error" (Qur'an IV. 135) There has been some disbelief on if God is real or not? However there are some signs that have occurred lately al around the world, which prove the existence of Allah. So if Allah exists then we are clearly made by him. These Pictures are real and no one has edited it one of them as even appeared on BBC News. WHAT IS EVOLUTION? AND WHO DISCOVERED IT ? Evolution is biology's "big idea." According to the latest estimates, there may be as many as 30 million species- different kinds of living things- on earth. Life permeates our planet. But how did life start in the first place? And how did all these different living things come to be as they are today? For the huge majority scientist, there is only one satisfactory explanation: they have evolved! Evolution is a gradual process of chemical and physical change that seemed to begin before life even started, and it still continues now. And had left its imprint in everything that is or was once alive, including our distant ancestors or/ourselves. It is responsible for the way we look, the way we reproduce, and -some would argue- even the way we behave. A young English naturalist named Charles Darwin. Who completed a round-the world-voyage aboard the naval ship: HMS Beagle. By the end of the five-year trip, Darwin had collected a wealth of evidence for evolution, although he had not yet known why it took place. Darwin's great breakthrough came in 1838, when he read an essay on the growth of the human population. Its writer was: Thomas Malthus argued that humans have a natural tendency to outstrip their food supply, creating competition for scarce resources. ...read more.

This is strong backing for the "out of Africa" hypothesis, because by then, h**o erectus had already spread to other continents. Some researches have suggested that modern humans emigrated from Africa in a single wave, perhaps as little as 500,000 years ago, but according to some recent genetic studies, there might have been several waves, and migration may have occurred in the reverse direction as well. Whatever the precise dates, human mtDNA is remarkably similar in people from all over the world, indicating that our species is still a young one- in many other primates, mtDNA is much more diverse. If the "out of Africa" hypotheses are true, then what happened to the hominids that were already in Europe and Asia when modern humans arrived? At the time these inhabitants were the Neanderthals- heavily built hominids that had larger brains than modern humans. Some pale anthropologist believed that Neanderthals and modern humans interbred but the majority suspect that they suffered a lack of fate. Despite their superior brain size, they were technologically outclassed by the newcomers. For example, it seems that Neanderthals never invented weapons that were designed to be thrown. After thousands of years of being marginalized, they eventually became extinct. CONCLUSION After explaining in depth both side's religious and scientific. I have come to conclusion that the battle between these two will last until someone can show evolution happened or stronger evidence. Because evolution is still a theory, meaning it isn't actually true, it's just an assumption. However even if a scientist in the future proves evolution right then there's still would be a conflict between religious people and scientist. Because if that person (who discovers and prove evolution absolutely right) would basically simply denying the beliefs of millions. But if a religious person proves that we were made by God, then vice versa. Either how I've come to conclusion that this battle will never end. Because both sides; might not accepted the truth in the future. The reason I have ?? ?? ?? ?? ...read more.