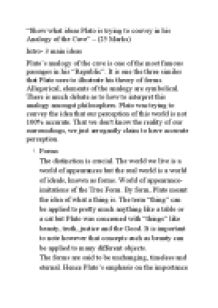 Plato's Analogy of the Cave

﻿?Show what ideas Plato is trying to convey in his Analogy of the Cave? ? (25 Marks) Intro- 3 main ideas Plato?s analogy of the cave is one of the most famous passages in his ?Republic?. It is one the three similes that Plato uses to illustrate his theory of forms. Allegorical, elements of the analogy are symbolical. There is much debate as to how to interpret this analogy amongst philosophers. Plato was trying to convey the idea that our perception of this world is not 100% accurate. That we don't know the reality of our surroundings, we just arrogantly claim to have accurate perception. ...read more.

It is important to note however that concepts such as beauty can be applied to many different objects. The forms are said to be unchanging, timeless and eternal. Hence Plato?s emphasis on the importance of the real world compared to the changing world of appearances. In this world there are only shadows and images of the Forms. 1. Immortal Soul As humans, we are born with a dim recollection of what Forms are according to Plato?s theory of the immortal soul. Our soul observed the forms before we were incarnated into a body. Plato supports this claim by stating that this is where we get our basic understanding of truth, justice and beauty. ...read more.

Knowledge of the forms is an essential quality of any ruler so that he will govern wisely for society?s good and not for their own self interests. In the Republic, Plato criticized philosophers and politician who lead the people but do not actually know the truth. Plato believed that people need to be taught how to understand the forms so they could see clearly. However the actual act of teaching people could be potentially distressing, hence why the prisoner is described as being dragged up into the sunlight. 1. Power Plato believed that those who were aware of the forms existence should rule society as it provides them with the power of knowledge. ...read more.