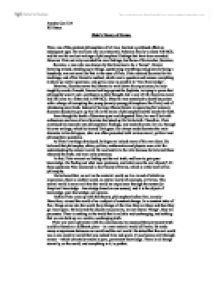 Plato's Theory of Forms. Plato, one of the greatest philosophers of all time, has had a profound effect on subsequent ages. He was born into an aristocratic Athenian family in about 428 BCE, and his are the earliest writings of philosophical findings that have been recorded. However Plato not only recorded his own findings, but those of his teacher, Socrates. Socrates, a man who was known by the Grecians to be a 'hornet', forever hovering around, standing up to things, questioning everything and generally being a busybody, was not seen like that in the eyes of Plato. Plato admired Socrates for his teachings, and of his Dialectic method, which was to question and answer everything to show up mortal ignorance, and get as close as possible to 'Real Knowledge'. However, Socrates never had chance to write down his experiences, he only taught by word of mouth, forever battling against the Sophists, in trying to prove that philosophy wasn't just a profession as they thought, but a way of life. Socrates career and life came to a bitter end in 399 BCE, when he was sentenced to death by poison with a charge of corrupting the young (namely young philosophers like Plato) and of introducing new Gods. Instead of leaving Athens forever or appealing for leniency, Socrates decided to give up his life in the name of philosophy and the search for truth. ...read more.

As this theory could have baffled many, Plato put this concept into an Allegory, a fable if you like, named the Allegory of the Cave. The allegory of the cave describes individuals chained deep within a cave. Bound so that vision is restricted, they cannot see one another. The only thing visible is the wall of the cave upon which appear shadows cast by models or statues of animals and objects that are passed before a brightly burning fire. The prisoners take these shadows to be the real objects - what we accept as true. One of the individuals is let free from the cave into the light of day. He finds it a struggle to adjust to the changes he is encountering - movement, the differences in the objects he sees, and the light. With the aid of the sun, that prisoner sees for the first time the real world and returns to the cave with the message that the only things they have seen heretofore are shadows and appearances and that the real world awaits them if they are willing to struggle free of their bonds. However, the prisoners inside the cave mock and laugh at him, and threaten to kill him, and anyone who attempts to free them. The shadowy environment of the cave symbolizes for Plato the physical world of appearances. Escape into the sun-filled setting outside the cave symbolizes the transition to the real world, the world of full and perfect being, the world of Forms, which is the proper object of knowledge. ...read more.

The philosopher has knowledge of this world and can use it to explain the existence of everything. The ignorant do not understand because they are satisfied with their world of appearances and are happy with the life they have. They are confident that what they see is real and do not want to know of an alternate world. Plato conceived the Forms as arranged hierarchically; the supreme Form is the Form of the Good, which, like the sun in the allegory of the cave, illuminates all the other Ideas. Next, in the hierarchy of the Forms, are the universal qualities, such as justice and truth, after them, come the concepts and ideas. The fourth stage in the hierarchy, or order of importance are physical living objects, e.g. humans, and after them, the physical inanimate objects, for example a book or a chair. Ultimately, the theory of Forms is intended to explain how one comes to know and also how things have come to be as they are. In philosophical language, Plato's theory of Forms is both theory of knowledge and theory of being. The people who have the most knowledge of this will be philosophers, so they should rule. We can get to gain 'real knowledge' - this knowledge is certain, there is a right and there is a wrong, whereas the knowledge we are normally used to -' Empirical knowledge' is largely based on opinion and is therefore not accurate. It is a long, painful process to real knowledge, but extremely worth it. ?? ?? ?? ?? Anneke c*x 12F RE Essay ...read more.