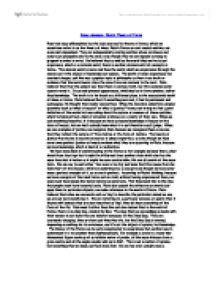 Essay Answers- Plato's Theory of Forms Plato had many philosophies but the main one was his theory of forms, which we sometimes refer to as the theory of ideas. Plato's Forms are not mental entities, nor even mind-dependent. They are independently existing entities whose existence and nature are graspable only by the mind, even though they do not depend on being so grasped in order to exist. He believed that as well as the world that we live in and experience, which is a material world, there is another eternal world of concepts or forms. This eternal world is more real than the world, which we experience through the senses and it the object of knowledge not opinion. The world of sense experience has constant change, and this was a popular topic in philosophy as there is no truth or evidence that the world never stays the same from one moment to the next. Plato believed that that the answer was that there is certain truth, but this material world cannot reveal it. It can only present appearances, which lead us to form opinions, rather than knowledge. The truth is to be found on a different plane, in the non-material world of ideas or forms. Plato believed that if something was real, it had to permanent and unchanging. He thought that reality and perfect. When the Socrates asked him complex questions such as 'what is beauty?' or 'what is justice?' he was not trying to find a good definition of the words but was asking about the nature or essence of these qualities, which he believed had a kind of universal existence or a reality of their own. When we call something beautiful, it is because we have an innate knowledge of beauty or the form of beauty, but we don't actually know what it is and therefore can't judge. When we see examples of justice, we recognise them because we recognise them as we see that they reflect the nature of True Justice or the form of Justice. ...read more.

Behind them burns a fire. Between the fire and the prisoners there is a parapet, along which puppeteers can walk. The puppeteers, who are behind the prisoners, hold up puppets that cast shadows on the wall of the cave. The prisoners are unable to see these puppets, the real objects, that pass behind them. What the prisoners see and hear are shadows and echoes cast by objects that they do not see. Such prisoners would mistake appearance for reality. They would think the things they see on the wall (the shadows) were real; they would know nothing of the real causes of the shadows. If a prisoner says "That's a book" he thinks that the word "book" refers to the very thing he is looking at. But he would be wrong. He's only looking at a shadow. The real referent of the word "book" he cannot see. To see it, he would have to turn his head around. Plato's point: the general terms of our language are not "names" of the physical objects that we can see. They are actually names of things that we cannot see, things that we can only grasp with the mind. The prisoners may learn what a book is by their experience with shadows of books. But they would be mistaken if they thought that the word "book" refers to something that any of them has ever seen. Likewise, we may acquire concepts by our perceptual experience of physical objects. But we would be mistaken if we thought that the concepts that we grasp were on the same level as the things we perceive. Plato's simile of the sun, image of the divided line, and allegory of the cave are intended to clarify exactly how the things we experience in the sensible, ordinary world (e.g., chairs, drawn triangles) are less real than the ideal models (Forms) on which they rely for their existence and in terms of which they are intelligible. ...read more.

Plato's answer is: the Form of Justice, the "one over the many." A non-conventionalist answer to questions of meaning: there is some thing that is referred to by 'just' whenever it is used. Hence, when you talk about justice and I talk about justice, we are talking about the same thing. We belong to the same world, not each of us in his own private world. If we disagree in what we apply the term 'just' to, we cannot both be right. Plato ends up using the theory of the soul that he also proposes in the Phaedrus. The soul, on this view, has three parts, which correspond to three different kinds of interests, three kinds of virtues, three kinds of personalities- depending on which part of the soul is dominant, and so, properly, to three kinds of social classes that should be based on the three personalities, interests and virtues. Plato believes that our experience of the Form pre-dates our experience of the "real" object. Aristotle, Plato's pupil, was critical of this idea and believed that the "Form" is developed through continued experience of physical things. In Plato's later works, like the Parmenides, Plato seems more open to the difficulties and criticisms of his theory of the Forms. Despite the obvious problems with the theory, the main point is an important one: is it possible to really know anything? At the time Plato was writing there was a group of itinerant philosophers called Sophists who believed that knowledge is relative: what matters is not what is true, but what you can be persuaded to believe. For Plato such relativism was dangerous and he set out to show that is possible to have knowledge of things. The question of what can we know continues to be a central issue of debate in philosophy. Plato's philosophy forces us to consider such questions, and it was Plato's main concern that too many people simply cannot be bothered to think for themselves or to question their beliefs. ...read more.