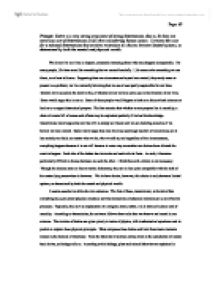 Sartre is a very strong proponent of strong determinism, that is, he does not merit any sort of determinism at all when considering human action.

Prompt: Sartre is a very strong proponent of strong determinism, that is, he does not merit any sort of determinism at all when considering human action. I present the case for a minimal determinism that involves restriction to choices between limited options, as determined by both the mental and physical worlds. We do not live our lives in despair, constantly worrying about what may happen unexpectedly. For many people, life does seem like something that we control handedly. Life seems to be something we can direct, or at least influence. Supposing there are circumstances beyond our control, they rarely seem to present us a problem; we live contently believing that we are at least partly responsible for our fates. Seldom do we question the truth in this, of whether or not we have some say in the direction of our lives. Some would argue this is not so. Some of these people would happen to look at a deity or hard sciences to lead us to a cogent determined purpose. The fact remains that whether or not purpose lies in causality, a chain of events full of causes and effects may be explained perfectly if we had the knowledge. Determinists would argue that our free will is simply an illusion and we are deluding ourselves if we believe we have control. Sartre would argue that even the most seemingly random of occurrences are in fact entirely our fault; no matter what we do, who we talk to, and regardless of the circumstances, everything happens because it is our will because in some way or another our choices have allowed the event to happen. Each side of the debate has its merits and each side its flaws. As such, it becomes particularly difficult to choose between one and the other. I think that such a choice is not necessary. Though the choices seem at first to mark a dichotomy, they are in fact quite compatible with the truth of the matter lying somewhere in between. ...read more.

While we can conceive of circumstances where the crag or the walls would not be obstacles, we can just as easily conceive of circumstances wherein they would. Both examples seem to show that the physical world does in fact limit us. We may not desire to move the mountain or pass through the wall, but even if we did, we could not do so. This is a stark contrast to Sartre's intended point. There is a factor that those on both Sartre and determinists seem to ignore, the nature of the connection between the physical world and the psychical one: the relationship between the physical and the mental. This is a connection that is very hard to pin down exactly, but is nonetheless of the greatest importance to any discussion of free will. It seems obvious that mental phenomenon and physical phenomenon cannot be measured in the same way. Thoughts, beliefs and ideas do not have any apparent mass, any specific charge or amount of energy in the sense that physical phenomenon do. At first, it seems that the mental and the physical must exist on entirely different planes. If this were true, determinism would make a lot of sense. With the mental and the physical separated, it would be near impossible for any mental process to affect the "real" world. Unfortunately, this is not the case. Our thoughts and beliefs are linked to the physical world in a very real sense. Our consciousness does not leave our body at will, it does not float freely from one object to the next, giving them the appearance of intelligence. Instead, it stays in place, always attached to our corporeal form. Anything that happens to the physical form seems to affect the mental state as well. If the body is cut, the mind will experience the sensation of pain. The reverse of this process also seems to occur with relative frequency. ...read more.

Again, actions entirely on the mental plane are entirely free. Once they begin to tie in with the physical world, with physical desires or laws, limits begin to be placed on this freedom. As Sartre himself says, without limitation there can be no freedom. "There can be a free for-itself only as engaged in a resisting world. Outside of this engagement the notions of freedom, of determinism, of necessity lose all meaning." These limitations, the resistance brought about by both the physical and mental worlds, do not imply we have no freedom. It implies only that we have a limited number of choices. In a given situation, I do not have the option of making myself invisible to the human eye. I do not have the option to become immaterial, and float away from danger. The reality of the physical world makes this impossible. However, I can choose what I think, I can choose how I interpret the situation, and I can choose how that interpretation will affect my actions. Then, these choices will determine how I interact within the rules of the physical world. I am not a slave by nature; I am not purely a subject to a set of rigid laws that limit my options to a single path. Instead, I find myself within a system that presents me with an incredible amount of paths, each slightly different from the rest, each with slightly different consequences than the others. Far from a slave, I am free to choose from these paths. Though my choices are limited by the realities of both the physical and mental worlds, they still do exist. In addition, as such, I am free to interact as I choose within the laws of the world around me. While this may pale in comparison to the universal empirical freedom promised by Sartre, it is enough to leave some hope, even just a glimmer, of being the master of one's own destiny with a discrete set of criteria to guide us. 1 Being and Nothingness (1943). 2 Ibid. Paper #3 ...read more.