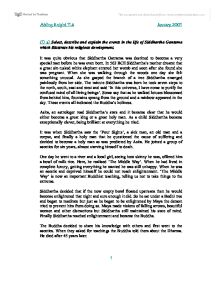 Select, describe and explain the events in the life of Siddhartha Gantama which illustrate his religious development

(1) a) Select, describe and explain the events in the life of Siddhartha Gantama which illustrate his religious development. It was quite obvious that Siddhartha Gantama was destined to become a very special man before he was even born. In 563 BCE Siddhartha's mother dreamt that a great six-tusked white elephant entered her womb and soon after she found she was pregnant. When she was walking through the woods one day she felt something unusual. As she gasped the branch of a tree Siddhartha emerged painlessly from her side. The minute Siddhartha was born he took seven steps to the north, south, east and west and said 'In this universe, I have come to purify the confused mind of all living beings'. Some say that as he walked lotuses blossomed from behind him, fountains sprang from the ground and a rainbow appeared in the sky. These events all indicated the Buddha's holiness. Asita, an astrologer read Siddhartha's stars and it became clear that he would either become a great king or a great holy man. As a child Siddhartha became exceptionally clever, being brilliant at everything he tried. It was when Siddhartha saw the 'Four Sights', a sick man, an old man and a corpse, and finally a holy man that he questioned the cause of suffering and decided to become a holy man as was predicted by Asita. He joined a group of ascetics for six years, almost starving himself to death. ...read more.

Bhikkus or Bhikkunis dedicate their whole lives to Buddhism and are therefore much more likely to become enlightened. Lay people instead aim to earn merit in order to have good karma and eventually reincarnate into someone who is given the chance to become a Bhikku/Bhikkuni. A way of earning this merit is to lead a moralistic life by following Buddhist beliefs such as the Eightfold Path. The basis of Buddhism is the Four Noble Truths. A Buddhist must first not only know, but also understand and support this belief before trying to devote themselves to other aspects of the religion. Buddhists believe that all life involves suffering and dissatisfaction (dukkha), and the cause of this is desire (tanha). It seems natural to want things; we do it all the time, we seldom realise it is causing us to suffer. Complete happiness, we seem to think is when we have everything we want, but this will probably never happen. You may say that if you are wealthy, healthy and surrounded by loved ones you will enjoy life and experience no suffering. At first, yes, it may give you great pleasure but soon it will just become routine and will take your good fortune for granted. You will become restless and find the same surroundings dull. You will soon channel all you desire into another item and will therefore never be fully happy and content and always want more. This supports the first Mark of Existence, Annica; the belief that nothing is permanent and everything is always changing. ...read more.

Some people make the mistake of thinking that Buddhists believe in the Buddha as a god. Although Buddhists may have shrines to the Buddha, he is not actually thought of as a god but a very wise enlightened teacher. When offerings are made to the Buddha, they are not made to worship him, but in order to remember his wisdom and teachings. If a Buddhist makes offerings in order to worship then they do not have 'Right Understanding'. You cannot pray to him, only pay respect, as he is in Nirvana and can therefore not 'hear' you and answer your prayers as with other religions. The dictionary definition of 'religion' is as follows: 1. the belief in a superhuman controlling power, esp. in a personal God or gods entitled to obedience and worship. 2. the expression of this worship. 3. a particular system of faith and worship. 4. life under monastic vows (the way of religion). 5. a thing that one is devoted to (football is their religion). Buddhism would come under number three and perhaps number five. Here are views of the definition of religion for the following... "...a set of symbolic forms and acts which relate to the ultimate conditions of his existence" -R.N.Bellah "...an enduring organisation of principles by which behaviour can be judged on some scale of merit" -Melford Spiro "Religion is the human attitude towards a sacred order that includes within it all being-human or otherwise ie belief in a cosmos, the meaning of which both includes and transcends man.' -Peter Berger All these statements support Buddhism as a religion. Aisling Knight 11.4 January 2001 1 1 ...read more.