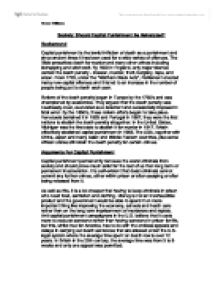 Should capital punishment be reinstated?

Society: Should Capital Punishment Be Reinstated? Background Capital punishment is the lawful infliction of death as a punishment and since ancient times it has been used for a wide variety of offences. The Bible prescribes death for murder and many other crimes including kidnapping and witchcraft. By 1500 in England, only major felonies carried the death penalty - treason, murder, theft, burglary, r**e, and arson. From 1723, under the "Waltham Black Acts", Parliament enacted many new capital offences and this led to an increase in the number of people being put to death each year. Reform of the death penalty began in Europe by the 1750's and was championed by academics. They argued that the death penalty was needlessly cruel, over-rated as a deterrent and occasionally imposed in fatal error. By the 1850's, these reform efforts began to take place. Venezuela banished it in 1853 and Portugal in 1867, they were the first nations to abolish the death penalty altogether. In the United States, Michigan was the first state to abolish it for murder in 1847. Britain effectively abolished capital punishment in 1965. The USA, together with China, Japan and many Asian and Middle Eastern countries, plus some African states still retain the death penalty for certain crimes. Arguments For Capital Punishment Capital punishment permanently removes the worst criminals from society and should prove much safer for the rest of us than long term or permanent incarceration. ...read more.

The figure for homicides in 2007 was 734. The principal causes of homicide are fights involving fists and feet, stabbing and cutting by glass or a broken bottle, shooting and strangling. 72% of the victims were male with younger men being most at risk. Figures released in 2009 show that since 1997, 65 prisoners who were released after serving life were convicted of a further crime. These included two murders, one suspected murder, one attempted murder, three rapes and two instances of grievous bodily harm. The same document also noted that 304 people given life sentences since January 1997 served less than 10 years of them, actually in prison. Arguments Against Capital Punishment According to many religions life is sacred and precious. God is the only person that can create or take away life. Penalising someone through capital punishment goes against this belief, even if they have killed someone themselves. Everyone also has the right to live, even those who have committed murder; sentencing someone to death goes against this right. It is hypocritical for the law to be able to kill someone who had done the same. The most common and most convincing argument against capital punishment is that innocent people will get killed because of mistakes or flaws in the justice system. ...read more.

They still do today in those countries where executions are carried out in public. It is hard to prove this one way or the other - people stop and look at car crashes but it does not make them go and have an accident to see what it is like. The death penalty is the bluntest of all punishments, it removes the individual's humanity and with it any chance of rehabilitation and their giving something back to society. In the case of the worst criminals, this may be acceptable but is more questionable in the case of less awful crimes. Overall, I think that not having capital punishment is superior as it has a lot more pros than it does cons. For starters, innocent people will not be getting killed for something they have not done, which I feel is the main reason. Secondly, criminal will have to live with what they have done for the rest of their lives, which in its self is a punishment, as well as the disappointment from their friends and family. Lastly, as stated, having capital punishment does not help prevent crime. It has been proven that whilst capital punishment takes place crime levels rise. They only reason why capital punishment would be a good thing is that criminals would not have the opportunity to reoffend which means that it should help keep crime levels lower or at least prevent them from increasing. ...read more.