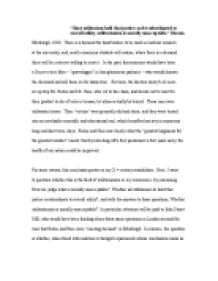 Since utilitarians hold that justice can be subordinated to overall utility, utilitarianism is morally unacceptable. Discuss.

﻿?Since utilitarians hold that justice can be subordinated to overall utility, utilitarianism is morally unacceptable.? Discuss. Edinburgh, 1828. There is a demand for dead bodies, to be used in medical research at the university, and, as all economics students will realise, where there is a demand, there will be someone willing to meet it. In the past, this someone would have been a Resurrection Man ? ?gravedigger? in less glamorous parlance ? who would disinter the deceased and sell them on for dissection. But now, the doctors want fresh meat, so up step Mr. Burke and Mr. Hare, who cut to the chase, and decide not to wait for their product to die of natural causes, let alone actually be buried. These men were utilitarian heroes. Their ?victims? were generally old and alone, and they were turned into an invaluable scientific and educational tool, which benefited society in numerous long and short term ways. Burke and Hare saw clearly what the ?greatest happiness for the greatest number? meant: that by knocking off a few pensioners a few years early, the health of our nation could be improved. For some reason, this conclusion grates on my 21st century sensibilities. Here, I want to question whether this is the fault of utilitarianism or my conscience, by examining How we judge what is morally unacceptable?, Whether all utilitarians do hold that justice is subordinate to overall utility?, and with the answers to these questions, Whether utilitarianism is morally unacceptable? ...read more.

From this point of view, it could be argued that utilitarianism is morally unacceptable if its administration violates an absolute principle which we choose to believe in ? for example, that killing is wrong. In a sense, the debate can be viewed as a chicken-egg dilemma, based on whether we think rationality or instinct came first. Mill argues himself that while instinct is natural ? ?Mankind are always predisposed to believe that any subjective feeling, not otherwise accounted for, is a revelation of some objective reality.? (Utilitarianism: 5.2/176) ? it is just as natural to rationally consider the way we make our decisions. Instinct may be a feeling based on past rationalisations, but that does not mean we should stop continuing to be rational in the present. J.C.C. Smart (69) asks ?why should our more particular moral feelings [from our consciences] be more worthy of notice than our more generalised ones [to be rational]??, and this is the crux of the argument. If we think we should be rational, and our rationality approves utilitarianism, then utilitarianism is morally acceptable. If not, we are still in the quagmire of uncertainty, and it remains possible that utilitarianism could promote some consequences that are morally unacceptable according to some absolute values we may have. Whether utilitarianism actually will promote them requires a closer inspection of the type of utilitarianism we are considering. We can look at the difference between classical Benthamite utilitarianism and Mill?s utilitarianism. ...read more.

Thus it seems likely that Bentham?s utilitarianism would commit acts which might be viewed by absolutists as ?morally unacceptable? more regularly that Mill?s would, but that neither would rule them out. We conclude by reflecting on the complexity of morality, and the idea proposed by J.C.C. Smart (73) that, ?it is possible that there is no ethical system which would be satisfactory to all men, or even to one man at different times.? Returning to 19th century Edinburgh, utilitarianism could either (pretty ambitiously) push forward and say that Burke and Hare did the right thing, or (more likely) fall back and say that the personal liberties of those murdered did not need to be infringed to prevent harm to others, or simply that customary morality, which should be relied upon, prohibits murder. However, it is possible to amend this example and create one where it was the case that killing a granny would provide the cure to an otherwise unavoidable epidemic ? so that utilitarians would have no alternative but to do the deed. The response to this is to abandon the defence of utilitarianism and attack other moral theories. For example, we can argue that Nozick?s deontological form of morality provides a loophole to commit acts which are, objectively, ?morally unacceptable? by way of its provision for the avoidance of catastrophe. Killing someone is never going to be a nice act, but there may be occasions when it is the least bad alternative, and at least Mill?s utilitarianism provides a way of recognising this. ...read more.