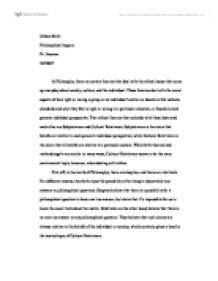 In Philosophy, there are certain theories that deal with the ethical issues that come up everyday about society, culture, and the individual. These theories deal with the moral aspects of how right or wrong a group or an individual’s action is, based on that cultures standards and what they feel is right or wrong in a particular situation; or based on each persons individual perspective. Two ethical theories that coincide with these ideas and each other are Subjectivism and Cultural Relativism. Subjectivism is the claim that beliefs are relative to each person’s individual perspective, while Cultural Relativism is the claim that all beliefs are relative to a particular culture. While both theories and methodology’s are similar in many ways, Cultural Relativism seems to be the more controversial topic, however, when dealing with ethics.

Cultural Relativism is certainly a critical matter in Philosophy, when talking about ethics. Again, it’s the ethical theory that’s based on the effect that the rightness or wrongness of a person’s action depends exclusively on the standards of that person’s culture. For example, in one part of the world, it may be immoral and offensive for women in society to wear blue jeans, whereas in American society it is completely normal and not even thought to be unethical, because its an everyday occurrence. Basically, what’s said to be right and wrong depends completely on that society, and what they feel is ethical depending on their culture. If Chinese culture feels its unethical to wear hats in public, that doesn’t mean its unethical for the Japanese culture to. In Cultural Relativism, these ethical choices are based solely on one particular culture and what they feel is right or wrong.

Therefore, since morality is based on society, and different societies have different views of right and wrong, there can be no moral absolutes. Since there are no absolutes, under this view of cultural relativism, all moral views determined by one’s culture are deemed true whether they conflict or not. Cultural Relativism is therefore true, as these cultures feel that their view on ethics is true. In this case, truth goes hand-in-hand with society’s view on what is moral and what is not.

I, on the other hand, happen to agree with a philosopher from the text, by the name of Willard V.O. Quinn. Quinn “describes each persons view of the world as a partially stable and partially fluctuating “web of belief”. The “facts” cannot prove or disprove conceptual scheme, because what we accept or reject as a fact and how we interpret it will always be decided in terms of the whole fabric of our web of beliefs” (stated from the text, page 140). Basically, Quinn is trying to express that each cultures views on ethics may be true for that individual culture, but in the bigger picture, or “web of belief”, it may not exactly be true because its we who determine what’s right and what’s wrong in the end.