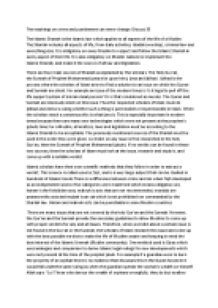 Teachings on crime and punishment can never change in Islam. Discuss.

﻿The teachings on crime and punishment can never change. Discuss 35 The Islamic Shariah is the Islamic law which applies to all aspects of the life of a Muslim. The Shariah includes all aspects of life, from daily activities, ibadah (worship), criminal law and everything else. It is obligatory on every Muslim to respect and follow the Islamic Shariah in every aspect of their life. It is also obligatory on Muslim nations to implement the Islamic Shariah, and make it the source of all law and legislation. There are four main sources of Shariah as explained by the scholars. The Holy Qur'an, the Sunnah of Prophet Mohammad (peace be upon him), ijma and ijtihad. .Ijtihad is the process where the scholars of Islam strive to find a solution to an issue on which the Quran and Sunnah are silent. For example an issue of the modern times is ?is it legal to pull off the life support system of a brain dead person? Or is that considered as murder. The Quran and Sunnah are obviously silent on this issue. Thus the respected scholars of Islam must do ijtihad and derive a ruling whether such a thing is permissible or impermissible in Islam. ...read more.

For example if a guardian were to burn the property of an orphan there is no evidence that discusses this in the Quran however it would fall underthe same ruling as when the guardian spends the orphan’s wealth on himself. Allah says: “Lo! Those who devour the wealth of orphans wrongfully, they do but swallow fire into their bellies, and they will be exposed to burning flame.” [Surah al-Nisâ’: 10. Both acts bring loss to the orphan so they are both punished in the same way. Muslim nations should strive to implement the Islamic Shariah in all matters. All laws, legislation, trade, politics and all other matters should be conducted according to the Shariah. Despite this no Muslim country actually currently follows the Shariah correctly. Instead many nations today rely in their so called "constitutions" on foreign systems of law. Many nations where the majority of inhabitants are Muslims derive their law from western systems of law, such as French or British law. This includes all matters including criminal law and even family law! The Quran states “And whoever does not judge by what Allah revealed, then they are Kafirun.”Surat Al-Maidah, Ayah 44. This practise of picking only some parts of God’s lawand abandoning the rest is not accepted in Islam. ...read more.

Indeed, He does not like wrongdoers? Quran 42:40 There are six crimes for which punishment is hadd (fixed): Apostasy, robbery, theft extramarital s*x, unproven accusation of unchastely and drinking of an intoxicant. Punishments for these ranges from lashes to death, except for these crimes punishment is decided by the courts. When non Muslims hear of punishmentssuch as amputations of hands they generalise Shariah law as barbaric and medieval and suggest that it should be banned however these harsh punishments are only sent as deterrents and for any punishment to actually take place, proof must be provided, along with a confession of the crime or witnesses testifying against the criminal. If any of these is not sufficiently presented, Islamic law requires the hadd crime to be treated as a lesser crime. Similarly, if a thief could prove that he/she only stole because of need, then the Muslim society would be held at fault and made to supply that need and there would be no hadd punishment. Likewise, to be penalized for adultery, the couple had to be actually witnessed performing the physical act by four people who were in a position to identify both parties without doubt. This is why hardly anyone has actually been prosecuted because it would be impossible to provide such evidence. ...read more.