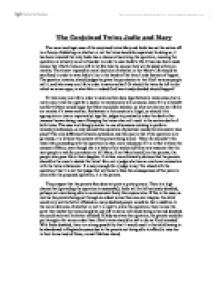 The Conjoined Twins Jodie and Mary

The Conjoined Twins Jodie and Mary The moral and legal case of the conjoined twins Mary and Jodie has set the nation off in a frenzy of debating on whether or not the twins should be separated. In doing so, it has been revealed that only Jodie has a chance of surviving the operation, meaning the operation is virtually an act of murder in order to save Jodie's life. It has also been made known that if both twins are left to let fate take its course, they will be dead within six months. The almost impossible moral decision of whether or not Mary's life should be sacrificed in order to save Jodie's lies in the hands of the three Lords Justices of Appeal. The question remains; should judges be given the permission to 'act God' as some people call it, and take away one life in order to save another? Or should the twins be left to die which as some argue, is what fate or indeed God has already decided should happen? ...read more.

One now assumes that the next people to ask for permission to kill Mary, if not Mary herself, are her parents; the people who gave life to their daughter. It strikes me as blatantly obvious that the parents should be the ones to decide the twins' fate, not a judge who has no emotional connection with the twins whatsoever. It is easy enough for a judge to say 'Go ahead with the operation,' but it is not that judge that will have to face the consequences of the years to come after the proposed operation; it is the parents. The prospect that the parents face does not paint a pretty picture. There is a high chance that (providing the operation is successful), Jodie will be left seriously disabled, perhaps not even being able to communicate freely like anyone else. If this is the case, as well as the parents being put through an ordeal worse than one can imagine, the child could very well be better off dead as many disabled people would be. ...read more.

We live in a modern age of medicine and technology that allows us to save lives and that is what this operation will do - save a life. In my opinion, one life saved is better than two lives lost, even if it does mean ending Mary's life six moths early. But more important than my view is the parents view, and I find it ridiculous that they are unable to decide what happens to their children, and that these court officials somehow feel like they have the right to determine the fate of someone else's children. Well I and many others rightfully disagree. Surely it should be the parents that are responsible for their own children, not irrelevant court judges who don't have to deal with the consequences of their decision. Even if the parents are apparently 'too overwhelmed' to decide what is right for their children it is still their responsibility. What ever decision is made regarding the twins there will inevitably be ongoing arguments against what ever happens, and this is unavoidable as I'm sure the judges very well know. Sam Boyd 9L ...read more.