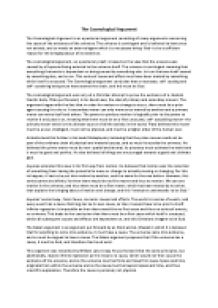 ﻿The Cosmological Argument The Cosmological Argument is an a posteriori argument consisting of many arguments concerning the cause of the existence of the universe. The universe is contingent and is believed to have once not existed, and so needs an external agent which is a necessary being- God- to be a sufficient reason for the bringing about of its existence. The cosmological argument, an a posterior proof, is based on the view that the universe was caused by a Supreme Being external to the universe itself. The universe is contingent meaning that everything that exists is dependent on being caused by something else. In turn that was itself caused by something else, and so on. This series of cause and effect must have been started by something which itself is uncaused. The Cosmological argument concludes that a necessary, self- causing and self- sustaining being must have started the chain, and this must be God. The cosmological argument was not just a Christian attempt to prove the existence of a classical theistic deity. ...read more.

The world is a series of events, and every event has a cause. Nothing can be its own cause, as then it would have to be prior to itself. Infinite regression is impossible as then there would be no first cause and thus no series of events; no universe. This leads to the conclusion that there must be a first cause which itself is uncaused, which all subsequent causes and effects are dependent on, and this Christians imagine to be God. The Kalam argument is an argument put forward by al- Kindi and al- Ghazali in which it is believed that for anything to come into existence, it must have a cause. The universe came into existence, and so must be argued to have a cause. The Kalam argument proposes that if the universe has a cause, it must be God, and therefore God must exist. This argument was reworked by William Lane Craig. He put forward that the same principles, but additionally, rejects infinite regression as this means no cause, which would not then cause the existence of the universe, and so the universe must be finite and have first cause. ...read more.

F.C. Copleston agrees with the rejection of infinite regression, for an infinite number of contingent beings can only continue their, it doesn?t explain what started the sequence, as contingent beings cannot bring themselves into existence. An infinite chain of train carriages can move nowhere without and engine, likewise a series of events couldn?t have begun without a necessary being to support the contingent beings. Copleston concludes that as the universe doesn?t contain within itself its own reason for existing, it must lie outside the universe in a self- explanatory being. Richard Swinburne more recently argued that the chance of there being nothing is much greater than there being something. Yet there is something, suggesting a creator. The existence of the Universe can be explained by God. ?If we can explain the many bits of the universe by one simple being we should do.? (Is There a God Oxford Press 1996). To conclude, the cosmological argument requires that God be a complete explanation for the existence of the universe, containing within himself all the characteristics that are necessary for him to be so. The argument is essentially attempting to prove that God is a necessary being, and the simplest explanation for the existence of the universe. ...read more.