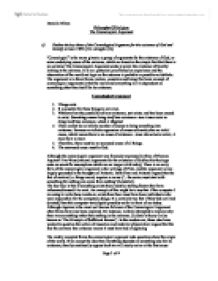 Philosophy Of Religion The Cosmological Argument A) Outline the key ideas of the Cosmological Argument for the existence of God and identify at least TWO of its strengths (14) "Cosmologial" is the name given to a group of arguments fot the existance of God, or some underlying cause of the universe, which are based on the simple fact that there is an universe! The Cosmological Argument seeks to prove the existence of God by looking at the universe. It is an a posteriori proof based on experience and the observation of the world not logic so the outcome is probable or possible not definite. The argument is in three forms; motion, causation and being.The basic concept of cosmological arguments is that the world and everything in it is dependent on something other than itself for its existence. Cosmological Argument 1. Things exist. 2. It is possible for those things to not exist. 3. Whatever has the possibility of non-existence, yet exists, and has been caused to exist. Something cannot bring itself into existence since it must exist to bring itself into existence, which is illogical. 4. There cannot be an infinite number of causes to bring something into existence. Because an infinite regression of causes ultimately has no initial cause, which means there is no cause of existence - since the universe exists, it must have a cause. 5. ...read more.

Clearly there will be those who claim the world is just a 'brute fact'. The world simply exists and possibly has always existed -infinite! Against this theists usually argue that it is contrary to our human instincts to simply accept that the world 'just is'. They say that humans need to have an ultimate meaning in their life and need to find answers to such questions as, "Where did I come from?" and, "Why am I here?" But for a theist to answer these questions they need to assume that the world and universe is the work of God. This is an assumption, which not everyone is going to happy to adopt. The strengths of the Cosmological Argument lie in both its simplicity and easily comprehensible concept that there cannot be an infinite number of causes to an event. Some arguments for God's existence require more thought and training in terms and concepts, but this argument is basic and simple. Also, it is perfectly logical to assert that objects do not bring themselves into existence and must, therefore, have causes. It is an inductive argument that starts from an inductive first premise - The Universe exists! Another strength of the cosmological argument is the expansion of the universe - the big band theory- Kalam argument! ...read more.

A more powerful case against the cosmological argument depends on the difficulty of seeing God as "a necessary being", the cause of Himself. We don't know that necessary existence is a meaningful concept. Even if it is, why shouldn't the Universe or the Big Bang, the most basic, earliest thing we actually know about, itself be considered the first, necessary cause? Bertrand Russell defended the idea of the universe as a "brute fact." Surely this makes more sense. In this worldview, the universe, not God, would be put forward as self-causing. Claiming that God is instead of just a brute fact shifts the problem to why He has no cause, rather than the universe - which we at least know exists - has no cause. But probably the most important objection that can be made to the cosmological argument is that even if it succeeds completely and shows the existence of some first cause of the universe, outside the universe, it does not in any way show the existence of God. It is surprising the number of people who use it as their proof for God without acknowledging that the first cause could be anything. Some philosophers however would say the most critical flaw in the cosmological argument, lies in its faulty understanding of time and causality. Modern cosmological theory states that the beginning of the Universe is, by definition, also the beginning of time. Danielle Hilton Page 1 of 4 ...read more.