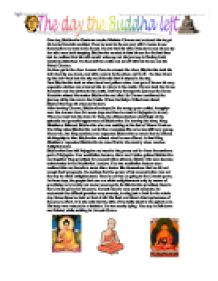 The day the Buddha left.

One day, Siddhartha Gautama awoke Minister Channa and ordered him to get his horse Kandaka saddled. Then he went to the son and wife's rooms to see them before he went to the forest. He saw that his wife (Yasodara) and his son by her side were both sleeping. Siddhartha wanted to kiss his son for the last time but he realized that his wife would wake up and his journey to finding truth would be disturbed. He then left the castle and set off with his Horse and his friend Channa. He then got to the river Anoma. Once he crossed the river, Siddhartha took his hair-knot by one hand, and with a sword in the other, cut it off. He then threw up the hair-knot into the sky and it is said that it stayed in the sky. Next Siddhartha took an alms-bowl and yellow robes. And gave Channa his very expensive clothes and ordered him to return to the castle. Channa took the Horse Kandaka and the clothes to the castle. ...read more.

But he did not accept their proposals. He decided that the power of his concentration was not the way to attain enlightenment. Thus he carried on going to the Uruvela grove. In those days, the people that one can attain enlightenment only by means of practising very hardly and under severe pain. So Siddhartha practised them in the Uruvela grove for six years. He took food in very small amounts. He undertook the difficult practice very severely, having just a fruit for the whole day. Some times he took no food at all. His flesh and blood dried up because of the severe effort. It is also said that the skin of the belly stuck to the spinal cord. His body was reduced to a skeleton. He was nearly dying. One day he fell down and fainted while walking in Uruvela Grove. The meditation masters thought he had died. He then suddenly woke up. Siddhartha then thought to himself that he wouldn't be able to reach enlightenment unless he was healthy and strong. So he went back to the town of Rajagaha and asked for food and clothing. He then became strong and active again. ...read more.

Mara rode the Girimekhala elephant and fought Siddhartha with his evil warriors but this all didn't succeed Siddhartha's will was too strong. Suddenly Siddhartha was enlightened. He had become a Buddha. Now the Buddha knows the truth of life, he now has to teach other people the truth of life. He had lots of teachings. Here are the main teachings: * Reincarnation: Reincarnation or Samsara, which means "continuation" or "carrying on". This means that a person has more than one life I think that if it were someone else living in Siddhartha's place then he or she won't leave the palace to find enlightenment so I don't know how Siddhartha did this. I think that Siddhartha Gautama is very lucky because he didn't die when he was going with very little food. He is also very patient because he was waiting for 6 years to become a Buddha and if it were me trying to reach enlightenment I would only wait for a maximum of 6 months. I also think that Siddhartha big will to becoming a Buddha was so extraordinary that it beat Mara's huge army. I don't think anyone's will can beat Siddhartha's. Now I can see why Mahayana Buddhists think that Siddhartha Gautama is a God. ...read more.