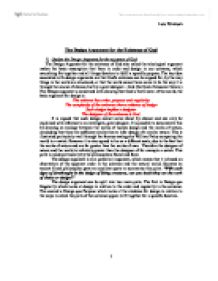 The Design Argument for the Existence of God

The Design Argument for the Existence of God 1) Outline the Design Argument for the existence of God The Design Argument for the existence of God also called the teleological argument makes the basic assumption that there is order and design in our universe, which everything fits together and all things function to fulfil a specific purpose. The key idea associated with design arguments are that God's existence can be argued for, by the way things in the world are structured, or that the world cannot have come to be the way it is through the course of chance, but by a great designer - God (the God of classical theism.) The Design argument is concerned with showing that God is the Creator of the world; the basic argument for design is: The universe has order, purpose and regularity The complexity of the universe shows evidence of design Such design implies a designer The designer of the universe is God. It is argued that such design cannot come about by chance and can only be explained with reference to an intelligent, great designer. It is possible to demonstrate this by drawing an analogy between the works of human design and the works of nature, concluding that there are sufficient similarities to infer design of a similar nature. ...read more.

His analogy is between a watch and the world, his argument was design qua purpose. If we were to come across a watch, we would be able to conclude that it shows all the marks of contrivance and design. We would take the accurate assumption that it was not made through chance, but designed by a watchmaker. In this same way we can look at the world and our universe, that it has been designed, by a great designer - God. Therefore this is a clear outline of the design of the world being proof of God. Vardy wrote in his book (The puzzle of God) about Paley's argument that we should notice from this analogy that we do not need to know the purpose of the watch or the universe in order to infer a designer, simply that the design implies a designer. This analogy is a definite strength of the argument; it offers clarity and makes its point by relating the world to something more manageable to imagine which we can relate to. Paley is not the only philosopher who has used an analogy to describe their viewpoint. Aquinas and Hume have also used effective analogies clarifying their argument. The teleological argument is an a posteriori argument. This means that the design argument can only be known to be true or false by reference to experience, to how things actually are in the world. ...read more.

There must be more than physical laws to account for the tremendously high improbability of life. This point is one of A.E.Taylor's points. F.R.Tennant in his writings 'Philosophical Theology' agrees with the anthropic principle stating that the cosmos is constructed for the development of human life and this could not have happened by chance. This agrees with Dysons argument. Tennant also postulates the aesthetic principle. This is the principle that states that the universe is more that simply orderly; it possesses a natural beauty beyond that which is necessary to live. Beauty is held to have no survival value nor has human appreciation of beauty any apparent real value in helping humans to live together or to be more effectively in the environment within which they find themselves. Naturally there is a survival value in females and males finding each other attractive, cut what is the survival advantage of seeing the beauty in a snowflake. These two thought provoking questions are raised by Vardy. The ability to appreciate beauty, therefore, may be held to be an indication that there is a God. Clearly this is another strength of the teleological argument the anthropic principle and the aesthetic principle both bring up questions that science cannot answer, making the point of God being the designer of the universe. This aesthetic argument shows how beauty goes beyond what is needed for human survival; it gives pleasure and reflects God's glory. ?? ?? ?? ?? Lulu Wimbush 1 ...read more.