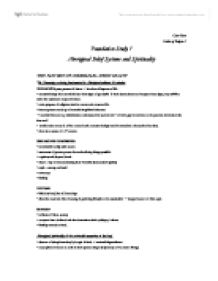 The Dreamings as being fundamental to Aboriginal cultures &amp; societies

Chau Phan Studies of Religion I Foundation Study 1 Aboriginal Belief Systems and Spirituality THE NATURE OF ABORIGNAL SPIRITUALITY The Dreamings as being fundamental to Aboriginal cultures & societies DREAMINGS: past, present & future ( involves all aspects of life ( ancestral beings leave world left w/ their signs of goodwill. If their descendants can interpret these signs, they will live under the assurance of good fortune. ( main purpose of religious ritual: to renew and conserve life. ( human person made up of material & spiritual elements ( material element req. individuals to understand the sacred tradn of their grp & conform to the patterns determined by that tradn ( world order comes fr. all the events in wh. ancestor beings travel & transform themselves into sites. ( there is no sense of a 1st creator. DREAMINGS COMPRISES: ( inextricable r/ship with nature. ( awareness of greater power that makes living things possible. ( a spirit world beyond death ( ritual - way of communicating b/w 2 worlds (humanity & spirits) ( myth - strong oral tradn ( totem sys. ( kinship TOTEMS ( link b/w land, kin & Dreamings ( allow the trad/nal Abor. hunting & gathering lifestyle to be sustainable ( integral nature of Abor. spir. KINSHIP ( is fabric of Abor. society ( everyone has a defined role that determines their r/ship w/ others. ( kinship extends to land. Aboriginal spirituality & its extricable connection to the land. ( absence of sharp boundary b/w spir. & land ( mutual dependence. ( many places formed on earth in their present shape by journeys of Ancestor Beings. ( land is whole environment sustained by ppl. & culture. ( land is core of Abor. spir. ( ownership of land = responsibility to nurture & care for it. ( land is based on divisn & distributn of ritual responsibility rather than upon rights to use & occupy it. ...read more.

ch. has strict approach ( desire to preserve integrity of Scriptures. ( 'Man must not separate...what God has joined together' (Matt 19:6) ( 'anyone who divorces his wife...and marries another commits adultery' (Matt 19:9) ( Cath. believe b/cs marriage is divine, it cannot be overturned by human law ( infidelity is an exceptn, h/e, & an annulment can be obtained ( divorce allowed on 'the ground of unchastity' (Matt) ( church's original approach of complete rejection of divorce has, rather, become one of urging its prevention and promoting compassion, evident after Pope John Paul II issued a document in 1981 declaring that divorcees 'are not excommunicated'. ( in all cases, divorce is regrettable. The way in which Islam gives ethical guidance to marriage & divorce ( diff. in opinion b/w Sunni & Shi'ite concerning temp. marriage, h/e few other distinctn concerning marriage & divorce. ( marriage perceived as the binding material in Islamic society ( h/e, marriage perceived as contract rather than sacrament ( occasn of marriage does not have to occur in presence of rel. official, & no exchange of eternal vows are made before Allah ( legitimacy of polygamy: 'choice, two, three, or four' (Qur'an 4:3) ( condemnatn of celibacy, sig. of marriage: ( 'When a man marries, he has fulfilled half his religion' (Hadith) ( 'Marriage is my sunnah' (Hadith) ( divorce is permissible, albeit 'the most detestable act God has permitted' (Hadith) ( detailed procedures are prescribed in order to proceed with divorce ( eg. allowing Iddah pd before 1st declaring divorce, in order to allow time for relfectn & possible reconciliatn ( men can grant divorce, whilst women can apply to be granted one. ( Divorce by talaq is right of the husband ( otherwise, the woman can ask for divorce by 'khul - case is presented to court. Whilst the Christian Sacred Text broadly discourages or promotes certain elements surrounding marriage and divorce, it does not instruct its followers to specifically follow numerous guidelines as evident in the Muslim Sacred Text. ...read more.