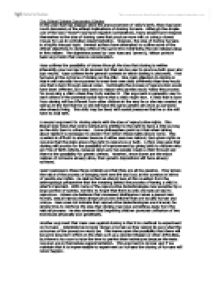 The Ethical Debate Concerning Cloning In the year that has elapsed since the announcement of Dolly's birth, there has been much discussion of the ethical implications of cloning humans. Although the simple use of the word "clone" may have negative connotations, many people have resigned themselves to the idea of cloning cows that produce more milk or using a cloned mouse for use in controlled experimentation. However, the idea of cloning humans is a highly charged topic. Several authors have attempted to outline some of the ethical objections to cloning while at the same time minimizing the role religion plays in this debate. The objections posed by Leon Kass and James Q. Wilson provide basic arguments that deserve consideration. Kass outlines the possibility of clones through the idea that cloning is neither inherently good nor bad in its process but that can be used to produce both good and bad results. Kass outlines three general contexts in which cloning is discussed. First he looks at the outcome of cloning on the child. One main objection to cloning is that it will naturally force parents to treat their new child differently than they would one that is born through sexual union. Technically the process of reproduction would have been different, but Kass sees no reason why parents would follow this process for producing a child unless they truly wanted it. This argument is generally used to warn others of the potential social harms that a child might face. A child that is born from cloning will be different from other children in the way he or she was created as well as in the fact that he or she will have the same genetic structure as someone else already living. This child may be faced with social pressures that he or she will have to deal with. A second argument for cloning starts with the idea of reproductive rights. ...read more.

These became the subject of study, debate, and finally, the decisions of Councils on every level - local, regional, provincial and ecumenical, all guided by the Holy Spirit. THE PRESENT STAND OF THE CHURCH Many controversial issues presented to us during these days of rapid change have reached the earliest stages in the process of dealing with controversial issues. People are beginning the search for answers - either with respect to attacks on the faith and practices of the Orthodox Church, or to new and previously unimagined problems - that can be formulated so as to preserve our salvation in Christ and to reflect the truths of the Faith. Often, since new issues arising from the rapid development of technology affect not only individual church members, but society as a whole, the attempt to answer the question for and within the Church also provides a basis for addressing these same questions on the public scene. In some cases the controversial issues can be addressed from long-standing doctrinal, ethical and canonical traditions. Where this is the case, there is little or no debate in the Church. One example is the Church's position on the legalization of abortion on demand. Since the Church went through the same debate in the early fourth century, it is not difficult to determine "the mind of the Church" on this issue, and to apply it to the current discussion. COMPLICATIONS FROM TECHNOLOGY The process, however, is not so easy in reference to the many issues which deal with the concerns arising from the amazing development of medical technology. How, for example, would the tradition of revelation address the issue of artificial insemination? The first question it would ask is if there are any implications in it from the perspective of salvation and the truths of Faith. In this case, since it clearly impinges on marriage, family, the relation between spouses, and the lives of human beings, there is an obvious connection. ...read more.

But still I like to think that even kibitzers can sometimes ask good questions. Let me try to summarize four points about medicine, morals, and religion. (1) Some people believe in God's existence; all of us believe that men exist. Our medical philosophy should therefore be humanistically, humanely motivated. If human compassion is reinforced by a theistic faith, all the better. But it is only better if the faith happens to reinforce the compassion. Alas, not all religions do. (2) Patients are persons, not just bodies. A truly human being is mental and moral as well as physical. The physical side, physiology, spontaneous or artificially supported biological functions, by themselves do not make a human being. The practice of medicine can become the ministry of medicine only if we realize that the quality of life is more important than mere quantity. Our devotion is not to life but to human life. (3) In order to be morally responsible we should not wear blinders, seeing only one patient at a time. We need a telescope to see our true obligations. In our society and culture there are so many of us and we are so interdependent that we need mathematical morality, ethical arithmetic, a statistical sense of obligation-not the first-come-first-served simple doctor-patient ethics of the horse-and buggy era. (4)We shall have to learn to live without absolutes, such as "Our sole obligation is to the patient under care" and "Life must be prolonged as long as possible" and "We must not disclose what we have learned in professional confidence" and "No cost is too much to cure a human ill." Instead of moral norms or principles of such undiscriminating and universal application we must make medical decisions by a situation ethics; what is right depends on loving concern for persons and the variables in each case. Situation ethics is clinical ethics. No good clinician finds the answer to any patient's problem in a prefabricated form out of a book. He sees the patient. ...read more.