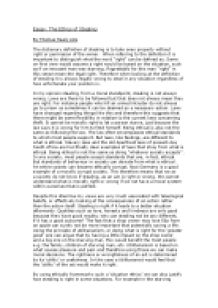 The Ethics of Stealing

﻿Essay: The Ethics of Stealing By Thomas Healy L6G The dictionary definition of stealing is to take ones property without right or permission of the owner. When referring to the definition it is important to distinguish what the word ?right? can be defined as. Some on first view would assume a right would be based on the situation, such as if an innocent man was starving. Regrettably for this man ?right? in this sense mean the legal right. Therefore when looking at the definition of stealing it is always legally wrong to steal in any situation regardless of how unfortunate your position is. In my opinion stealing, from a moral standpoint, stealing is not always wrong. Laws are there to be followed but that does not always mean they are right. For instance people who kill an armed intruder do not always go to prison as sometimes it can be deemed as a necessary action. Laws have changed regarding things like this and therefore this suggests that there might be some flexibility in relation to the current laws concerning theft. It cannot be morally right to let a person starve, just because the law says it is wrong for him to feed himself. ...read more.

By using ethically frameworks such a ?situation ethics? we can also justify how stealing is right in some situations. For example in the starving man scenario, one can presume that the act of stealing would best serve ?love? as this would be the most ?loving? thing to do. A big part of my decision was using ?natural moral law? or the belief that humans have an inbuilt sense of right and wrong. This assumes that we as people have a universal moral code and that we knew what was wrong or right since birth. Assuming one was using this principle he could argue that the natural human thing to do would to see the act of a starving man to steal as right. This is because preservation of life is more important than the act of stealing. From a moral standpoint it is also more humane, otherwise those who reject this idea believe material wealth is more important than human life. Others regard stealing in a slightly different manner, e.g. those who follow ?Divine Command?. They feel that stealing is wrong because it breaks one of the 10 commandments. They use their faith to decide what is right and what is wrong. Many Christians believe that as the 10 commandments are the word of God they are always right and therefore they use this as their judgment. ...read more.

I believe that these frameworks are more reliable to use than for instance divine command, as basing modern day decisions on scriptures written centuries ago seems somewhat disillusioned. That is not to say the basic messages are wrong. By accepting that stealing may be the right thing to do in some scenarios we are by no mean condoning it and we should not lose sight that people do have a right to keep their possessions and that stealing causes pain and hardship. But we need to analyse why one is doing the act, looking at the intentions can see this. If someone is purely stealing to benefit themselves out of greed rather than necessity then it is wrong but if someone is forced into that situation what other option do they have? Teleological arguments provide a much more ethically sound decision because they are concerned with the consequences, if one believed in deontological framework would he or she commit a ?good act? even if there were bad consequences? Therefore we can conclude that under teleological framework stealing in circumstances of necessity is ethical as the loss to the possessor is dwarfed in comparison to the thief. Using of natural moral code the victim of the theft would have different feelings towards someone stealing because it may save their life, to one stealing out of greed or jealousy. ...read more.