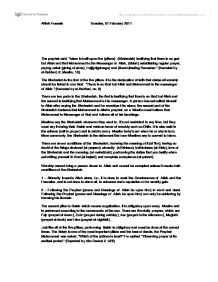 The five pillars of Islam. The prophet said: Islam is built upon five (pillars): (Shahadah) testifying that there is no god but Allah and that Muhammad is the Messenger of Allah, (Salah)

The prophet said: "Islam is built upon five (pillars): (Shahadah) testifying that there is no god but Allah and that Muhammad is the Messenger of Allah, (Salah) establishing regular prayer, paying zakat (giving of alms), Hajj(pilgrimage) and (Sawm)fasting Ramadan." (Narrated by al-Bukhari, 8; Muslim, 16). The Shahadah is the first of the five pillars. It is the declaration of faith that states all worship should be linked to one God: "There is no God but Allah and Muhammad is the messenger of Allah." (Narrated by al-Bukhari, no. 8) There are two parts to the Shahadah, the first is testifying that there's no God but Allah and the second is testifying that Muhammad is His messenger. A person has submitted himself to Allah after saying the Shahadah and he worships Him alone, the second part of the Shahadah declares that Muhammad is Allah's prophet, so a Muslim must believe that Muhammad is Messenger of God and follows all of his teachings. Muslims say the Shahadah whenever they want to, it's not restricted to any time, but they must say it during their Salah and various forms of worship such as Dhikr. It is also said in the adhaan (call to prayer) ...read more.

this emphasises the importance of Salah. The third pillar of Islam is Zakat. Zakat can be defined as a number of things such as, the giving of alms, religious tax, or giving to the poor. The word itself means purification and growth, by giving zakat, Muslims are purifying their wealth and allowing it to grow because they believe that all wealth belongs to God and that they must distribute it fairly so they give to the poor, as God will give them more. 2.5% of every Muslims income must go to the poor as zakat yearly. The importance of Zakat is shown in the Quran, when Allah says, "Keep the prayer and pay the Zakat" (2:3) Zakat is given to a number of people, such as, the poor, people who recently converted to Islam, prisoners of war or their families, people who owe money, hospitals, schools or mosques, and Muslim students who are studying Islam. Giving Zakat is a form of worship and an expression of gratitude. As well as this, it tests a person's degree of obedience to God, and eliminates greed. The fourth pillar of Islam is Sawm, this is fasting. Allah said in the Quran, "O believers, you must fast so that you may learn self-restraint. ...read more.

dispute unjustly during the Hajj" [al-Baqarah 2:197] When in Ihram you must what Allah has ordered of religious laws, such as praying on time in congregation and must avoid all that Allah has forbidden of indecent and immoral speech and sin, as the above ayah says. As well as this, a pilgrimage must avoid annoying other Muslims with his words or actions and behave in a respectable manner. Specific things that are usually allowed are forbidden when in the state of Ihram, they are, you should not cut anything from your hair or nails and apply perfume after entering ihram, either to your body, your clothes, your food or your drink. You should not hunt and touch your spouse with desire, by kissing, touching, etc. This includes having intercourse. You should not enter into a marriage contract for yourself or arrange a marriage for anyone else, and you should not wear gloves. All of these things apply to men and women, however there are some additional rulings that men should follow. If the conditions of Ihram are broken, then it reduces the reward of performing hajj, however some scholars say that it can nullify your hajj if you know that performing a certain action will invalidate your ihram. ?? ?? ?? ?? Afifah Hussain Tuesday, 01 February 2011 ...read more.