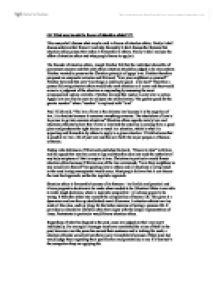 The founder of situation ethics, Joseph Fletcher felt that the individual should be of paramount concern and that each ethical situation should be judged in its own context.Fletcher wanted to preserve the Christian principle of agape love

(A) What may be said in favour of situation ethics? [7] This essay shall discuss what may be said in favour of situation ethics. Firstly it shall discuss scholars that favour it and why. Secondly it shall discuss the features that situation ethics posses that makes it favourable to others. Finally it shall analyse the effect of situation ethics and why people favour to apply it. The founder of situation ethics, Joseph Fletcher felt that the individual should be of paramount concern and that each ethical situation should be judged in its own context. Fletcher wanted to preserve the Christian principle of agape love. Fletcher therefore proposed an anapaestic calculus and followed, "love your neighbour as yourself." Fletcher believed that only "one things is instrinclly good - love itself" Therefore a person following situation ethics would take each situation as it came and they would come to a judgment of the situation as responding by assessing the most compassionate option available. Fletcher claimed that Justice is only love in action. Agape love can also be seen to collapse into utilitarianism, "the greater good for the greater number" where "number" is replaced with "love" Paul Tillich said, "The law of love is the ultimate law because it is the negation of law, it is absolute because it concerns everything concrete. ...read more.

Even though situation ethics revolves around the one principle of Christian love, it can be argued that in fact It is going against the Christian Church and some of their teachings, because it is so individualistic it suggest that the decision of the individual is far more important than the church. Actions are not as dissimilar as Fletcher suggests, situation ethics can justify any situation and defend it, when others would argue that the action is morally wrong. Such as committing adultery, the adulterer may claim that it was the most loving thing to do because they gained pleasure and so did the other individual from his course of action in the end. However the partner would suffer intolerable heart ache because of her partner committing adultery, this shows that one person may believe their course of actions is the most loving thing to do, however from another individuals view, this is not at all the most loving thing to do. The negative effects of applying situation ethics : - for any individual it is not easy to determine the consequences of actions and the long lasting negative effect it could have on another individual. ...read more.

It appears that humans tend to pollute Agape love by the fact that they can be selfish at times, situation ethicists may choose the most loving decision, however they - like all humans - are likely to take into account the effect that this may have upon them and if they would benefit from this decision. Dacher Keltner from the university of California says, "In my seminars I asked my undergraduates to complete the following cause, "humans are..." and 70% of their responses referred to some form of selfishness." which clearly demonstrates that humans themselves are fully aware of their actions and that many can be selfish at times. Therefore in conclusion -situation ethics is an unacceptable ethical theory because for any individual it is not easy to determine the consequences of actions and the long lasting negative effect it could have on another individual even if they believe that they have chosen the most loving course of action. Situation ethics appears to be unacceptable because it has far too many flaws, such as it does not take into account the human nature, and different interpretation in situations. Fletcher - the founder of this ethical theory actually provided one single law that can be easily broken as another, because the absolute principle, "act situationally - act with the greatest love" is in fact a law. ...read more.