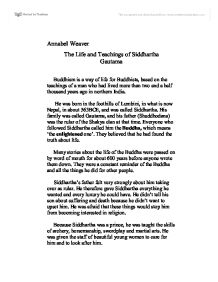 The Life and Teachings of Siddhartha Gautama

Annabel Weaver The Life and Teachings of Siddhartha Gautama Buddhism is a way of life for Buddhists, based on the teachings of a man who had lived more than two and a half thousand years ago in northern India. He was born in the foothills of Lumbini, in what is now Nepal, in about 563BCE, and was called Siddhartha. His family was called Gautama, and his father (Shuddhodana) was the rular of the Shakya clan at that time. Everyone who followed Siddhartha called him the Buddha, which means 'the enlightened one'. They believed that he had found the truth about life. Many stories about the life of the Buddha were passed on by word of mouth for about 600 years before anyone wrote them down. They were a constant reminder of the Buddha and all the things he did for other people. Siddhartha's father felt very strongly about him taking over as rular. He therefore gave Siddhartha everything he wanted and every luxury he could have. He didn't tell his son about suffering and death because he didn't want to upset him. ...read more.

He wanted to become more like a Sadhu, who gave up all his possessions and time to lead a spiritual life. He knew that this 'spiritual life' was for him to live. Then, one night, he left his family at the palace. Channa, his charioteer, drove him out of his father's city. He cut off all his hair, took off all his fine clothes and, wearing just a simple robe, he set out to a homeless life. He was 29 years old. For six years Siddhartha lived under strict discipline of the Hindu religion. In other words he lived as an ascetic. He had settled to live with five other holy men near the River Nairanjana. He had trained himself to fast for long periods of time and when he had done that he only ate a little, just enough for him to live on. Some people said that he nearly killed himself fasting like that. He grew so thin that you could see his backbone through his stomach. Then, one day, he decided that this fasting and discipline wasn't doing him any good. ...read more.

One of the main places where he taught was Varanasi, where he explained his teaching-which is now the basis of all Buddhist understanding and practice. He found the sanga- the order of monks and nuns who spent their lives spreading the teaching. Most people don't choose to be monks or nuns. They follow the Buddha's teaching, and apply it to work and family life. The sanga refers to all those who are monks or nuns. By the time the Buddha had died thousands of people in India had become his followers. During the next century his teaching spread throughout most of Asia. Today there are well over 500 million Buddhists living in countries such as India, Nepal, Thailand, Japan etc. There are many Buddhist centres in the west, Europe and the U.S.A. The Buddhists believe that everyone can achieve enlightenment. They hope to do so. Some say that we all have the 'Buddha nature' within ourselves. Siddhartha is called the Buddha because he was the first to be enlightened in this way. The Buddhists respect the Buddha in many different ways. They respect him as a great and famous teacher, helping others to understand the truth and meaning of life, and to help them gain enlightenment like the Buddha. ...read more.