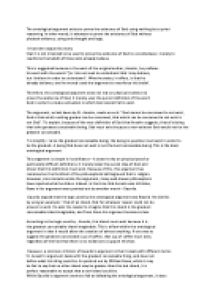 The ontological argument of Anselm and Gaunilo's response.

A being that does not exist is not the best conceivable being. This is the basic ontological argument. This argument is simple in its brilliance ? it doesn't rely on physical proof or particularly difficult definitions. It merely takes the purest idea of God and shows that this definition must exist. Because of this, this argument has remained on the forefront of the philosophical battleground that is religion. However, since Anselm wrote the argument, many well-known philosophers have rejected what he states. Indeed, in the time that Anselm was still alive, flaws in his argument were pointed out by another monk ? Gaunilo. Gaunilo argued that the logic used by the ontological argument was flawed. He did this by using an example ? that of an island, that for whatever reason could not be proven to exist. ...read more.

While Gaunilo's argument seems to fail at defeating the ontological argument, it does at the very least point out a flaw in the logic. To conclude, while the ontological argument at first appears to be sound, it is attackable in many ways ? two of which are detailed in this essay. Because of the nature of these attacks, it is difficult to remain in support of it. As it is, there is a general consensus among modern philosophers that the argument does not stand in its original form. Therefore, it would appear that this argument has not stood the test of time as well as some would claim. Despite this, however, it still remains an interesting footnote, if for no other reason than because of its age, and the length of time that it has survived. ...read more.