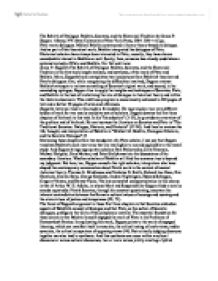 The Rebirth of Dialogue: Bakhtin, Socrates, and the Rhetorical Tradition by James P. Zappen. Albany, NY: State University of New York Press, 2004. 229 + viii pp. Plato wrote dialogues. Mikhail Bakthin constructed a literary theory based on dialogue. And as part of this theoretical work, Bakhtin interpreted the dialogues of Plato. Rhetorical scholars have always been interested in Plato; recently, they have shown considerable interest in Bakhtin as well. Surely, then, someone has already undertaken a systematic study of Plato and Bakhtin. No. Not until now. James P. Zappen's The Rebirth of Dialogue: Bakhtin, Socrates, and the Rhetorical Tradition is the first book-length analysis, and synthesis, of the work of Plato and Bakhtin. More, Zappen's book extrapolates two conjectures from Bakhtin's theories and Plato's dialogues: first, while recognizing the difficulties involved, Zappen reviews Bakhtin's attempts to retrieve something of Socrates' original work, and second, in his concluding epilogue, Zappen tries to apply the insights and techniques of Socrates, Plato, and Bakhtin to the task of revitalizing the role of dialogue in rhetorical theory and within the rhetoric classroom. This ambitious program is economically achieved in 160 pages of text and a further 60 pages of notes and references. Zappen's rhetorical task in this study is formidable. ...read more.

In "Cultural Conflict and the Testing of Persons and Ideas in the Laches" (67-93), Zappen highlights the dialogical techniques of anacrisis and syncrisis, the testing and comparing of personal convictions, but at the same time he calls our attention to the surplus of meaning that Plato wields as author. Within the dialogue, Laches and Nicias, two Athenian generals who figure prominently in Thucydides' account of the Peloponnesian War, are questioned by Socrates with regard to their understanding of courage. Over the course of this relatively brief dialogue, despite the earnest participation of all three figures, a succession of definitions fail. Socrates' relentless questioning demonstrates that Laches and Nicias do not really understand courage. Or, to be more precise, his questions reveal gaps and conflicts in their efforts to apply Homeric notions of courage in the circumstances of Athens' imperial democracy. But Socrates' tactical use anacrisis and syncrisis in this depicted conversation with Laches and Nicias is considerably amplified by Plato's strategic framing of that conversation as the Laches. Appearing in a composition offered to readers/listeners in fourth century Athens, the names of Laches and Nicias would evoke memories of Athens' missteps in the Peloponnesian War (83). The public memory of the war thus becomes another voice that engages the reader in a dialogue with the conversation Plato portrays. ...read more.

Zappen's book does offer evidence for one significant change, however: The Rebirth of Dialogue presents as the new consensus the view that in the early works of Plato we find "a Socrates who practices dialogue as the only true art of politics and who rejects [sophistic] rhetoric as the dangerous tool of an imperialistic empire" (1). This is a view with which I am in full accord, but I do not think it is nearly as widespread or as readily accepted as Zappen suggests. While Arthur W. H. Adkins and Harvey Yunis can certainly be enlisted in this cause, I suspect scholars like T.H. Irwin, Terry Penner, and Gregory Vlastos would count themselves unwilling conscripts. Nevertheless, I am happy to see this viewpoint presented so effectively. One final note: Zappen twice cites me to sound a skeptical note regarding Yunis's Taming Democracy. In his two chapters on the Gorgias, Yunis interprets the dialogue as a Platonic rebuttal to Thucydides' positive analysis of Periclean statecraft. From this we may infer the implicit claim that Plato had read Thucydides' History of the Peloponnesian War. Given that Xenophon was obviously familiar with the work, I think this is plausible, indeed probable. My point in my 1999 Rhetorica review of Taming Democracy was that no one has yet assembled the case for this claim. That work still remains to be done. ...read more.