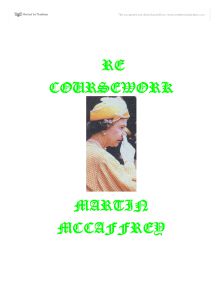 RE COURSEWORK MARTIN MCCAFFREY 12D The Sabbath is the weekly day of rest, which lasts from sunset on Friday until nightfall on Saturday, which is observed by Jews. It is viewed as being the most important day of the week. Observing the Sabbath day is the oldest of all Jewish traditions; the Sabbath day goes back to the time of Moses. The Sabbath is looked upon as extremely important for several reasons. It is the only festival mentioned in the 10 commandments, 'observe the Sabbath and keep it holy.' It also is connected with the release of the Jews from Egyptian slavery, the Exodus. The Exodus was the most important demonstration of God's power in Jewish history. Also, it is believed that God created the Earth in 6 days, and he rested on the 7th, so the Jews are following the example of God by resting on the 7th day. The Sabbath day combines the Exodus, and the creation of the Earth, which are the two greatest events in Jewish history. The Pharisees felt very strongly about the Sabbath and its rules, and believed they should never ever be broken, if a law of the Sabbath was broken, it was actually punishable by death. ...read more.

Jesus felt that human need should come before the law, as in the case of King David; if you need to eat then you should eat. To Jesus, human need came before the rules and regulations of the Sabbath, and eating when you are hungry is not against the law. The Pharisees feel that Jesus and his disciples should not be picking corn on the Sabbath; this shows how strict their attitude was to the Sabbath day and its laws. He says 'The Sabbath is made for the good of human beings; they are not made for the Sabbath. So the Son of Man is Lord even of the Sabbath.' He means that human beings do not exist on Earth solely for the Sabbath day, that the Sabbath was created for the humans. The religious leaders seemed to feel that the Sabbath rules should definitely come before human need, a totally different opinion to the ideas that were taught by Jesus. The third occasion when Jesus obviously broke the laws of the Sabbath was the case of the man with the paralysed hand. ...read more.

Many people also did not want to be forced to work on a Sunday, as it was their only day off a week. As Sunday is the only day without work for many people, if shops did not open that day, they would not be able to shop on any other day, in some cases for things like food. Jesus felt that human need came 1st, and people not being able to buy necessities on Sundays is putting the Sabbath before their needs. Sport to many people is classed as using a talent which was given to you by God, therefore acceptable on the Sabbath day, but others, who feel Sundays should be used for helping others and worship think sport doesn't help anybody, unless the sporting event is specifically arranged to benefit people. However for professionals who earn money from their sport, some people look it upon as work. However sport can be enjoyed by the people taking part and people watching, and can be used by a family as a way of bonding and spending time together. I believe that both shopping and sporting events should be permitted on a Sunday, as it is people's choice whether they wish to use Sundays for worship and rest, or treat it like any other day of the week. ...read more.