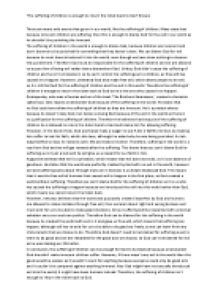 Therefore he believes that because of the suffering of children he is allowed to return the ticket back to God and blame him for allowing suffering. However, in the book of Job, God and Satan make a wager to see if Job is faithful to God, by making him suffer to test his faith, which Job does, although he asked why he was being punished. As Job stays faithful to God, he restores Job?s life and makes it better. Therefore, suffering in the world is a test from God and we will get rewards after the suffering. This shows that you can?t blame God for suffering as is it just a test and he will give us a reward for our faith in him. Augustine believed that evil is a privation, which means that evil does not exist, as it is an absence of goodness. ...read more.

evil has to exist for us to be able to do good act freely, as we can learn from any immoral acts that we choose to do. Therefore God doesn?t need to be blamed for suffering as evil is there to do good and we are rewarded for the good acts we choose, so God can?t be blamed for evil as he was making our life better. In conclusion, the suffering of children can be enough for God to be blamed because a benevolent God shouldn?t make innocent children suffer. However, if there wasn?t any evil in the world then the good would be useless as it wouldn?t count for anything because everyone could only do good acts and it couldn?t be compared against anything immoral. Also God might have not actually introduced evil into the world; it might have been humans instead. Therefore, the suffering of children isn?t enough to return the ticket back to God. ...read more.