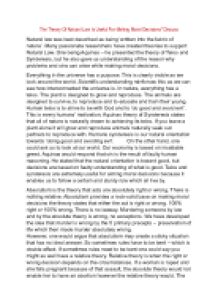 The Theory Of Natural Law Is Useful For Making Moral Decisions&quot; Discuss

Ã¯Â»Â¿The Theory Of Natural Law Is Useful For Making Moral Decisions" Discuss Natural law was best described as being â€˜written into the fabric of natureâ€™. Many passionate researchers have created theories to support Natural Law. One being Aquinas â€“ he presented the theory of Telos and Synderesis, but he also gave us understanding of the reason why problems and sins can arise while making moral decisions. Everything in the universe has a purpose. This is clearly visible as we look around the world. Scientific understanding reinforces this as we can see how interconnected the universe is. In nature, everything has a telos. The plant is designed to grow and reproduce. The animals are designed to survive, to reproduce and to educate and train their young. Human telos is to strive to be with God and to â€˜do good and avoid evilâ€™. This is every humansâ€™ motivation. Aquinas theory of Synderesis states that all of nature is naturally drawn to achieving its telos. ...read more.

Primary precepts are so fixed that secondary precepts were put in place to enforce them such as murder laws which link to preservation of life. These are very useful for making moral decisions because they are the creation of right and wrong. Abortion controls as well as murder laws have all been enforced to preserve the life of humans. One could say that some women are barren â€“ unable to reproduce. In the eyes of Aquinas, the woman who is barren has failed her purpose. The natural inclination is to reproduce, and barren women are not able to. The 5 primary precepts help immensely with making moral decisions because it gives every human a purpose in life, something to do whether thatâ€™s become a mother or father or if its to worship God. Aquinas and the theory of double effect have created a rock-sloid series of reasons of why natural law is fully and wholly useful for making good moral decisions on natural law that have become a concrete foundation for natural law and decision making. ...read more.