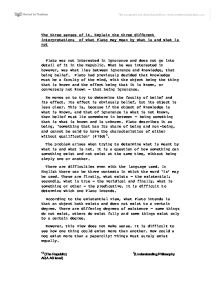 The three senses of it. Explain the three different interpretations of what Plato may mean by what it is and what it is not

The three senses of it. Explain the three different interpretations of what Plato may mean by what is and what is not Plato was not interested in ignorance and does not go into detail of it in the Republic. What he was interested in however, was what lies between ignorance and knowledge, that being belief. Plato had previously decided that knowledge must be a faculty of the mind, with the object being the thing that is known and the effect being that it is known, or conversely not known - that being ignorance. He moves on to try to determine the faculty of belief and its effect. Its effect is obviously belief, but its object is less clear. This is, because if the object of knowledge is what is known, and that of ignorance is what is not known, then belief must lie somewhere in between - being something that is what is known and is unknown. ...read more.

There are differing degrees of existence - some things do not exist, others do exist fully and some things exist only to a certain degree. However, this view does not make sense. It is difficult to see how one thing could exist more than another. How could a Dog exist more than a paperclip? Things must surely exist equally. However, some commentators have suggested that Plato was influenced by ethico-religious ideas, leading him to have and 'understanding' (in a religious sense) of how things can both exist and not exist at the same time. This is a plausible idea as Plato was surely influence by some aspects of mysticism, as seen in his notion of the forms. However, even this aspect of the interpretation of the view, is heavily flawed. It relies upon a religious - belief based - influence on a person, to allow them to understand a concept of knowledge and belief. ...read more.

According to the predicative view, what Plato means is that we can only know what is 'fully or completely f - where f is just...then talk of what is f and not f'3. So, one can hold a belief about what is wrong and is not wrong, or similarly what is just and what is not just. This is the most popular interpretation of what Plato intends; mainly as it does not hold the sever flaws relating to differing levels of truth or existence that the other two hold. However, another interpretation is that Plato may have meant all three, emphasising a particular one depending on the situation or context involved. If one view is to be taken, it may be that it is the predicative view that would be the safest course of action; as this would have the least detrimental effect on the text as a whole, if incorrect, than the other two; which may lead to problems based on the aforementioned differing degrees of truth and existence. ...read more.