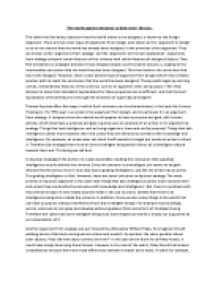 ﻿?The world appears designed, so God exists? Discuss. The claim that God exists, based on how the world seems to be designed, is known as the Design Argument. There are two main types of arguments from design, also known as the ?argument to design? so as to not assume that the world has already been designed, in the premises of the argument. They are known as the ?arguments from analogy? and the ?arguments to the best explanation?. Arguments from analogy compare certain features of the universe with similar features of designed objects. They find similarities or analogies between these designed objects and the world around us, leading to the intermediate conclusion that the world has also been designed. This then leads to the conclusion that God is the designer. However, there is also another type of argument from design which tries to follow another path to reach the conclusion that the world has been designed. These proofs begin by noticing certain, extraordinary features of the universe, such as its apparent order and purpose. Then they attempt to show that naturalistic explanations for these properties are insufficient, and that the best explanation of these features is through the existence of supernatural designer. Thomas Aquinas offers five ways in which God?s existence can be demonstrated, in his book the Summa Theologica. ...read more.

Anything which exhibits these features must design. Therefore the watch was has been designed by a designer. The universe is like the watch in that it possesses the same features, except on a far greater scale. Therefore the universe, like the watch, has also been designed, except by a ?wondrous universe maker? ? God. However, there are some criticisms to Paley?s argument, and Paley even comes up with some problems the argument may face. One criticism he comes up with is that some parts of the watch may appear to have no purpose. When Paley comes across the stone, he dismisses the stone as having no purpose straight away. Similarly if he came across a part of the watch that had no purpose, then this raises questions about the designer. Why would the designer include parts that have no evident purpose? This is comparable to the world where there are objects that seem to have no purpose such as random stones for example, and this raises questions about the ?wondrous creator?. The conclusion that the world has been designed is weakened because after all, a designer wouldn?t include pointless parts. In addition, philosopher David Hume also critiques arguments from analogy, writing thirty years before Paley. One of the main criticisms he makes is that we have no experience of world making. ...read more.

Therefore Darwin?s theory is seen as a big threat to the teleological argument, as it provides a naturalistic explanation for the existence of telos, without any reference to the concept of diving design. In conclusion, although Aquinas and Paley make a fairly good argument with the arguments from analogy, there are quite a few weaknesses to it, some of which are even pointed out by Paley. For example, from his analogy, there may be some parts of the watch that are pointless and have no purpose. Similarly there are objects in this world that appear to have no purpose, like stones, and this casts doubts on whether a being like God designed the world, because it raises the question as to why he would design and create pointless objects. Furthermore, criticisms to the analogy from design are made by philosopher David Hume. One of his main criticisms was that since we have no experience of world making, then we can?t come to the conclusion that the world was designed by God. He claims that in order to suggest something has been designed; we need to experience it being designed or manufactured, either directly or indirectly, or at least be able to compare it to something similar to it. However, in the case of the universe this is simply not possible therefore we cannot come to the conclusion that it has been designed by God, and hence God exists. ...read more.