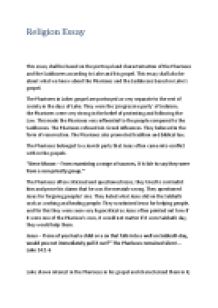 This essay shall be based on the portrayal and characterisation of the Pharisees and the Sadducees according to Luke and his gospel.

Jesus ? If one of you had a child or a ox that falls into a well on Sabbath day, would you not immediately pull it out?? The Pharisees remained silent. ? Luke 14:1-6 Luke shown interest in the Pharisees in his gospel and characterised them in it; JB green ? ?Luke is clearly interested in the Pharisees and that in his gospel, they have 3 main character traits; Interpretors of Jewish Law (Luke 11:37-44) Interested in promoting themselves JB Green ? The main issue in Luke?s characterisation of the Pharisees is to be hypicrosy which green views not as sincerity but as failure to follow gods purposes Their failure in Luke to recognize the identity and authority of Jesus ? Jesus heals a paralytic The Pharisees ...read more.

They had control of the temple worship, sacrifices and finances. They did not believe in the coming of the messiah nor did they believe in any form of resurrection. The Sadducees also refused oral law. The Sadducees were also rivals to the Pharisees. The sadducees laid little emphasis on the message of the prophets. They had little support from the public and their religious beliefs and practises were not totally isolated from their political context. To conclude, the Pharisees and the sadducees were opposed to each other and both had very different views to both politics and religion. Both groups were in ways opposed to jesus and belonged to groups that Jesus conflicted with. Each of the groups had two completely different reputations in society and they had very different social statuses. ...read more.