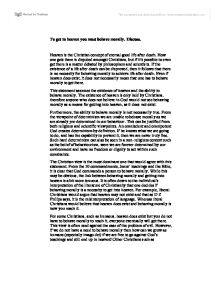 To get to heaven you must behave morally. Discuss.

if we are free to go against God's teachings and still end up in heaven? Other Christians such as Augustine argued against this point, saying that only those who do behave morally will get to heaven. This view has it's own problems. What of those who cannot behave morally, for they cannot distinguish between right and wrong? And is it right to punish a man for eternity because of one act he did in his time on earth? This former criticism is further justified through the existence of determinism. If he was pre-determined to act amorally, then he should not be held eternally responsible. Furthermore, this only works for Christians. He does not take into account any other religions, non-believers and agnostics. Therefore, only Christians would agree with the above statement, and only those who believe in judgement day would agree with Augustine's ideas. As the statement relies on the assumption of a life after death, those who dispute its existence are obviously going to criticise the need for behaving morally. ...read more.

While there is no proof for heaven, there is no proof that one doesn't exist either. If we take this approach that morals have come from society and individuals, then the concept of a conscience is destroyed. For without universal concepts of morality, then what we perceive as such through our conscience is far from given by God. Kant's moral theory points towards a God. He argues that morals are absolute and exist outside of us. On one level Kant would therefore agree with the statement. However, he also outlined why we should act moray. He argued that we should only act for duties sake (categorical imperatives) and not on the basis to achieve something (categorical imperatives). Therefore if we act morally not for duties sake, but to get to heaven surely we are using a categorical imperative? In conclusion, it is not clear if it is necessary to behave morally as it is not clear whether it is required to reach heaven, or in fact if heaven exists. It is clear that behaving morally should be an agenda of all, regardless of their beliefs of life after death however. ...read more.