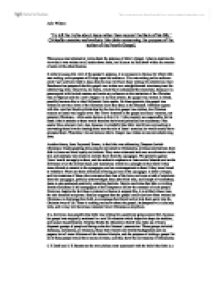 'To tell the truths about Jesus rather than recount the facts of his life.' Critically examine and evaluate this claim concerning the purpose of the author of the Fourth Gospel.

'To tell the truths about Jesus rather than recount the facts of his life.' Critically examine and evaluate this claim concerning the purpose of the author of the Fourth Gospel. There are several alternative views about the purpose of John's Gospel. I plan to examine the view that it was written to tell truths about Jesus, and discuss its likelihood within the context of some of the other theories. In order to assess this view of the gospel's purpose, it is necessary to discuss for whom John was writing, as his purpose will hinge upon his audience. If he was writing so his audience could 'see' and have faith in Jesus then he may well have been writing for unbelievers. Karl Bornhauer has proposed that the gospel was written as a straightforward missionary tract for unbelieving Jews. Only Jews, he claims, would have understood the document, because it is preoccupied with Jewish matters and omits any reference to the institution of the Christian rites of Baptism and the Lord's Supper. In its final edition, the gospel was written in Greek, possibly because this is what Hellenistic Jews spoke. On these grounds, the gospel was written to convince Jews of the Christian claim that Jesus is the Messiah. Robinson agrees with this view but Smalley thinks that by the time this gospel was written, the Christian mission to Israel was largely over. The 'Jews' featured in the gospel are Jesus' enemies, not potential Christians - while some believe in him (12:11) ...read more.

that such ideas - when taken over by Christians - involve a denial of the physical reality of Jesus in his life and death. Edwin Hoskyns argued the gospel was anti-Gnostic, as did E Scott, who thought John was basically a reinstatement of the Christian good news in Hellenistic terms. But he also found evidence that the author of John wrote to counteract heretical, Gnostic teachings - he insists on the reality of Christ's life, denies the Gnostic hierarchy of intermediate spiritual agencies, opposes the Gnostic idea that divine sonship is possible apart from the Christ, avoids Gnostic watchwords, and so on. Barrett thinks John was writing whilst Gnosticism was developing; and essentially was trying to 'nip it in the bud' before it really became successful (although Bultmann disagrees and thinks it was already established by c.100 AD). Gnostics, in general, think Jesus' message is for an elite, and only some will get to Heaven. The author of John was clearly conscious of Gnosticism, and apparently not completely or directly critical of it - he uses Gnostic imagery such as light and dark, heaven and earth, is sensitive to the importance of knowledge, and accepts a dualist framework for his theology of salvation. Bultmann believes that the author of John is actually a former Gnostic who is editing the sign source (which is the heart of the ministry), and that John uses a separate source from the synoptics, in which the signs do not feature. Bultmann thinks Gnosticism used the sign source too, but attached the redeemer myth to it. ...read more.

C H Dodd thinks this Kerygma is in John, Peter and Paul. Smalley accepts it is there in John and Paul but thinks it is less developed. He also believes there is a significant difference between its presence in John and in Paul, because Jesus is supposed to be 'the second Adam' in Paul, but John has a greater emphasis on surpassing Moses. He argues that the fourth gospel is much closer to the synoptics than to Paul, that Paul never saw the historical Jesus, only the risen Jesus, and is therefore incomplete. I would agree with Smalley's reasoning because in the Kerygma and in Paul there is little reference to Jesus' historical life, so the purpose of the gospels might have been to put teachings of Jesus into a historical setting. In conclusion, it is impossible to be sure of the purpose of John's Gospel, but it seems likely that the author wanted to communicate truths about Jesus, his role on earth, his divinity, etc. Smalley's views seem well supported by evidence, and I would agree that the gospel couldn't have been a purely historical account - although it may well have a true frame of events. Surely spreading the good news about Jesus would be more important than relating everything he said and exactly as it happened. Robinson, who thought the gospel was written before the synoptics, said that historicity might have been a purpose, but not the main one. Most of those who think the synoptics came first will disagree and think John's history is inaccurate, but as Brown as said, the accuracy is irrelevant, as the narrative frame is probably only there to strengthen teachings about Jesus. Julia Wilson ...read more.