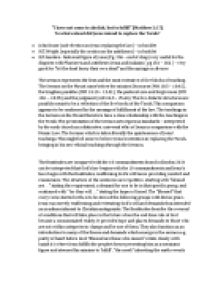 To what extent did Jesus intend to replace the Torah?

﻿?I have not come to abolish, but to fulfill? (Matthew 5:17) To what extend did Jesus intend to replace the Torah? 1. John Drane (sub-election on Jesus replacing the law) ? in booklet 2. N.T.Wright (especially the section on the antitheses) ? in booklet 3. E.P.Sanders : historical figure of Jesus (Pg. 206 ? end of chap) very useful for the disputes with Pharisees and Antitheses Jesus and Judaism ( pg 251 ? 264 ) ? very good for ?let the dead burry their own dead? and the sayings on divorce The sermon represents the first and the most extensive of five blocks of teaching. The Sermon on the Mount came before the mission Discourse (Mtt 10:5 ? 10:42), the kingdom parables (Mtt 13:10 ? 13:51), the pastoral care and forgiveness (Mtt 18:1 ? 18:35) and the judgment (mtt 24:3 ? 25:46). The five didactic structures are possibly meant to be a reflection of the five books of the Torah. This comparison appears to be confirmed by the message of fulfillment of the law. The teachings in the Sermon on the Mount therefore have a close relationship with the teachings in the Torah. The presentation of the Sermon sets rigorous standards ? interpreted by the early church as a distinctive, universal ethic of Jesus in comparison with the Mosaic Law. ...read more.

Pharisees had done, Israel was challenged by Jesus to discover the meaning of the commandments in terms of a totally integrated loyalty of heart and act. Additionally, N.T wright suggested that Jesus did not intend to replace the Torah, but instead produce a radically different way of being Israel in real-life Palestinian situations as the ruling interpretations of the Torah would lead to being Israel in the wrong way, leading to destruction. He rebuked the interpretations and modifications of the Torah and oral traditions by the Pharisees, suggesting a totally different approach and result following the very basic commands of God. Pericopes that emerged in response to challenges from Jesus? opponents, predominantly the Pharisees, suggested that Jesus was proposing some form of Torah replacement in his teachings. The dispute in the cornfield (mark 2:23) took place when Jesus was going against the Sabbath law ? ?plucking heads of grain?. Jesus seemed to go against the Torah and setting example to abolish it. However, this accusation is not justified as it is only contravening the oral tradition, not the Torah. Furthermore, technically it was the disciples who broke the law - ?his disciples began to pluck heads of grain?. ...read more.

Similarly in the story of the rich young man, Jesus implied that it is not enough that the man had kept all the commandments. It got to be matched with active faith, an ethical requirement that was originally in God?s commandments implicitly. Jesus is therefore reiterating hence intensifying the demands and wills of God, laying out moral teachings basing on the obedience required to enter the kingdom. The works of Torah functioned as symbolic praxis, as the set of badges which demonstrated both to observant Jews and to their neighbours that they were the people of the covenant. Jesus did not intend to replace the Torah despite the fact that throughout the Sermon it might seem, but intended to reinforcing and intensifying the spirit of the Torah in order for us to meet the demands of God required to the entering of the coming kingdom. Further, he criticized the oral Torah and modified it with a more universal ethic ? the original will of God. Jesus?s teachings can also be seemed as interim ethics for an audience awaiting the imminent arrival of the Kingdom. Therefore Jesus?s intention was not to replace the Torah. ________________ [1] N.T Wright: c.7 Stories of the kingdom (2) [2] N.T Wright [3] Sanders: Jesus and Judaism pg. 252 ...read more.