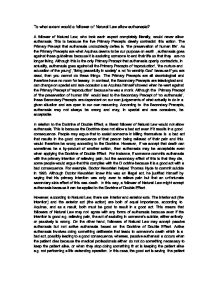 To what extent would a follower of Natural Law allow euthanasia?

However, according to Natural Law, there are interior and exterior acts. The interior act (the intention) and the exterior act (the action) are both of equal importance, according to Aquinas, and as a result, both must be good to result in a good act. This means that followers of Natural Law may not agree with any forms of euthanasia because even if the intention is good e.g. relieving pain, the act of assisting in someone's suicide, either actively or passively is wrong. On the other hand, followers of Natural Law may accept passive euthanasia but not active euthanasia based on the Doctrine of Double Effect. Active euthanasia involves doing something deliberate that leads to someone's death which is a bad act, possibly leading to a good consequence, whereas, passive euthanasia occurs when the patient dies because the medical professionals either do not do something necessary to keep the patient alive, or when they stop doing something that is keeping the patient alive e.g. not performing a life-extending operation. ...read more.

However, the characteristics that people are said to need to possess in order to be a person are not always possessed by children and therefore some people see it as acceptable to commit infanticide in view of these traits. Most people would consider infanticide to be a barbaric practise and think that although children may not yet possess these traits they have the potential to in the future. This causes us to question if euthanasia is not also a barbaric practise and if someone is in a coma, they also have the potential to develop these traits one day too. This leads many Natural Law followers to accept euthanasia on the basis that some humans do not have personhood, but reject euthanasia if the human has the potential to develop personhood e.g. if a person is in a coma. Although manipulation of Natural Law means there are times in which euthanasia could be acceptable, most people would generally accept that Natural Law would never justify euthanasia due to the five Primary Precepts which are clearly opposed to it. ?? ?? ?? ?? ...read more.