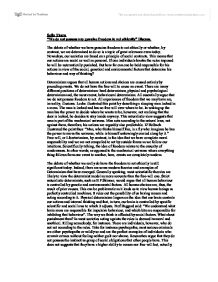 we do not possess any genuine freedom to act ethically

Sofia Thuru "We do not possess any genuine freedom to act ethically" Discuss. The debate of whether we have genuine freedom to act ethically or whether, by contrast, we are determined to do so is a topic of great relevance even today. Nowadays, our societies are based on a principle of social contracts. This means that our actions are social as well as personal. If one individuals breaks the rules imposed he will be automatically punished. But how far can one be held responsible for his actions in view of the social, genetical and environmental factors that determine his behaviour and way of thinking? Determinism argues that all human actions and choices are caused entirely by preceding events. We do not have the free will to cause an event. There are many different positions of determinism: hard determinism, physical and psychological determinism and, the most recent, behavioural determinism. All essentially argue that we do not possess freedom to act. All experiences of freedom that we may have are, in reality, illusions. Locke illustrated this point by describing a sleeping man locked in a room. ...read more.

Prof Haggard said: "We understand what brain areas are responsible for impulsive behaviour, and which bits are responsible for inhibiting that behaviour". The way we think is affected by social factors. What about punishment then? In most societies acting againts the rules is deemed immoral and unethical. Killing someobody, for instance. There are individuals, however, who do not act according to the rules. Take for instance psychopaths; most serious criminals are either psychopaths or mildly so and are the perfect examples of individuals who commit crimes without feeling neither guilt nor shame. Researches argue that they do not possess the instinctive grasp of social obligations that other people have. This does not suggests that they have a higher ability to reason nor free-will but, actually, that they have a deficiency in the way their psychology works. This idea supports the mechanical and deterministic view of the world. It suggests that crime reults from machines that are deficient, taking all the responsibility away from the individual. As for the question of punishment, one may simply say: I was determined to act immorally. There may be some truth in this naturalistic approach as we are clearly bound by natural laws - for instance the law of gravity. ...read more.

Becoming a better person and a better citizen is still possible through an internal revolution in the way we think and act. In this sense, the idea of free-will is still significant, even though scientifically speaking not accurate. Schimmel argues that: "the determinist model is more scientifically useful than the free-will one in search of a better understanding of why we behave as we do" However, the idea of free-will encourages us to exercise self-esteem and self-control - which are primary skills in order to become ethically sensitive and good individuals. This way of reasoning supports free-will on an existential level. As Sartre would say, it suggests that freedom is ultimately the goal and measure of our lives. To conclude with, I believe that the idea of free-will is too vague and unscientific to be able to explain how human behaviour and reasoning works. I agree that the deterministic model may be much more useful when analysing such questions. On the other hand, I also agree with Jean-Paul Sartre and his claim that freedom is a goal in itself. Whether we really have free-will or not is not so important as trying to achieve and developing as individuals. The idea of freedom is a stimulus to help us grow and gain control over our life and being. ...read more.