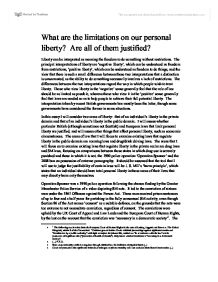 What are the limitations on our personal liberty? Are all of them justified?

What are the limitations on our personal liberty? Are all of them justified? Liberty can be interpreted as meaning the freedom to do something without restrictions. The principal interpretations of liberty are 'negative liberty', which can be understood as freedom from restrictions; 'positive liberty', which can be understood as freedom to do things; and the view that there is such a small difference between these two interpretations that a distinction is unwarranted, as the ability to do something necessarily involves a lack of restrictions. The differences between the two interpretations regard the way in which people wish to treat liberty. Those who view liberty in the 'negative' sense generally feel that the role of law should be as limited as possible, whereas those who view it in the 'positive' sense generally feel that laws are needed so as to help people to achieve their full potential liberty. The interpretation taken by recent British governments has mostly been the latter, though some governments have considered the former in some situations. In this essay I will consider two areas of liberty: that of an individual's liberty in the private domain and that of an individual's liberty in the public domain. I will assess whether particular British (although sometimes not Scottish) and European laws that limit personal liberty are justified, and will assess other things that affect personal liberty, such as economic circumstances. ...read more.

A slightly more objective law covering similar ground was passed in the 2008 Criminal Justice and Immigration Act. The law makes 'extreme p*********y' illegal, and one of the categories described in the Act for what 'extreme p*********y' is is 'an act which results in or is likely to result in serious injury to a person's a**s, b*****s or genitals'. This can be seen as a direct result of the Spanner case and presents a clear message that a consensual act can be deemed 'harmful'. Drug law is an area of U.K. law where consent is not seen as suitable defence in any situation, although the law is not the same in all E.U. countries. Spain, Portugal, Italy and the Netherlands have all adopted forms of decriminalisation, and all countries to varying extents have adopted rehabilitation-based drug policies. In Portugal drug use amongst school children has declined notably since decriminalisation and 'the number of new H.I.V. cases caused by using dirty needles to inject heroin, cocaine and other illegal substances plummeted from nearly 1,400 in 2000 to 400 in 2006'2. The overall number of deaths caused by overdoses 'dropped from around 400 to 290 annually'3. Overall drug use in Portugal has dropped, against a background of rising use in European states where illegal drug use is criminalised. In the U.K. almost 3000 people died in 2002 from drug overdoses4, making the Portuguese statistics proportionally brilliant. ...read more.

for political organisation and laws to work in such a way that these restrictions are limited, and indeed in some ways this is the case within the U.K. In conclusion, there are many restrictions upon our personal liberties, far more of course than those detailed in this essay, some of which are justified and some of which are not. * 1 The following text is taken from the European Court of Human Rights in the case of Laskey, Jaggard and Brown v. The United Kingdom, article 8 of the Convention: 'Common ground before Court: criminal proceedings against applicants constituted "interference by a public authority" with right to respect for private life, carried out "in accordance with the law" and in pursuance of legitimate aim ("protection of health or morals"). Only issue: whether interference "necessary in a democratic society". * (...) P.T.O. * State unquestionably entitled to regulate through criminal law the infliction of physical harm (...) * Court not persuaded that applicants' behaviour belonged to private morality and was excluded from State's intervention (...) * No evidence to support allegation of authorities' bias against homosexuals * Accordingly, reasons given by national authorities for interference are relevant and sufficient. * (...) interference not disproportionate. * National authorities entitled to consider interference "necessary in a democratic society" for protection of health. * Conclusion: no violation (unanimously).' 2 http://www.cato.org/pub_display.php?pub_id=10080 3 http://www.scientificamerican.com/article.cfm?id=portugal-drug-decriminalization 4 http://www.statistics.gov.uk/cci/nugget.asp?id=806 ?? ?? ?? ?? ...read more.