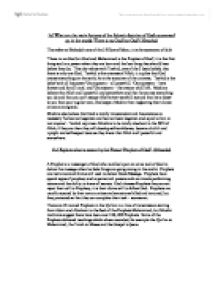 1a) What are the main features of the Islamic doctrine of God as summed up in the words 'There is no God but God' (10marks) This refers to Shahadah one of the 5 Pillars of Islam; it is the statement of faith 'There in no God but God and Mohammad is the Prophet of God', it is the first thing said to a person when they are born and the last thing they should hear before they die. This also relates with Tawhid, one of the 3 basic beliefs, that there is only one God. Tawhid is the oneness of Allah, it implies that God creates everything on the earth; he is the sustainer of the universe. Tawhid is the belief with all his power 'Omnipotent - all powerful', 'Omnipresent - here forever and for all time', and 'Omniscient - the creator of all life'. Muslims believe that Allah is all powerful and everywhere and that he can see everything you do and that you can't escape Allah's ever watchful ...read more.

Some of the Prophets delivered teachings which where recorded, for example the Qur'an to Mohammad, the Torah to Moses and the Gospel to Jesus. 1c) Mohammad has been called the 'Seal of the Prophets' Explain what this reveals about Mohammad's place in Islam. (10marks) Mohammad was the Seal of the Prophets because he was the seal of Gods message, which has been preserved for all time in the Qur'an. Mohammad came to direct society towards an understanding of true monotheism. In Islam Mohammad is widely respected because he was the Seal of the Prophets and so therefore they believe that it is the final example of how a true Muslim should live. A Muslim also respects Mohammad because for what he went through and suffered for Muslims and for Allah; this respect is reflected in his title the Al-Amin - the trustworthy and Al-Sadiq - the truthful and also in the book known as the Hadith. ...read more.

Saum is a very intense and personal struggle an example of Greater Jihad, the struggle of each individual Muslim to perform the 5 Pillars properly and follow the Shariah. The aim of fasting is to experience brotherhood through shared ordeals to develop self-control and Muslims believe it is meant to prepare you for any real sufferings the may happen in later life. Fasting also show that the person is submitting to the Will of Allah. During the Month of Ramadan every Muslim must recite the Qur'an and the whole of the Qur'an should have been read because this is what Mohammad did. Fasting also gives Muslims an opportunity to identify with the poor because they are able to sympathise what it is like to be starving and fasting brings Muslims closer to God because they are concentrating on God instead of the ordinary things in life. So as you can see the significance of Saum today for Muslims is important because they are learning self-discipline, sympathising with the poor and submitting to the Will of Allah. ...read more.