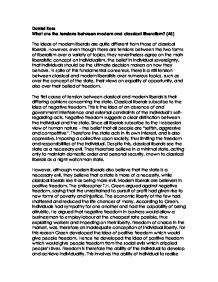 What are the tensions between modern and classical liberalism?

Daniel Ross What are the tensions between modern and classical liberalism? (45) The ideas of modern liberals are quite different from those of classical liberals. However, even though there are tensions between the two forms of liberalism over a variety of topics, they nevertheless agree on the main liberalistic concept on individualism, the belief in individual sovereignty, that individuals should be the ultimate decision makers on how they behave. In spite of this fundamental consensus, there is a still tension between classical and modern liberalists over numerous topics, such as over the concept of the state, their views on equality of opportunity, and also over their belied of freedom. ...read more.

Since all liberals subscribe to the Hobbesian view of human nature - the belief that all people are "selfish, aggressive and competitive". Therefore the state acts in its own interest, and is also oppressive, imposing a collective upon society, thus limiting the freedom and responsibilities of the individual. Despite this, classical liberals see the state as a necessary evil. They therefore believe in a minimal state, acting only to maintain domestic order and personal security, known to classical liberals as a night watchman state. However, although modern liberals also believe that the state is a necessary evil, they believe that a state is more of a necessity, while classical liberals see it as being more evil. ...read more.