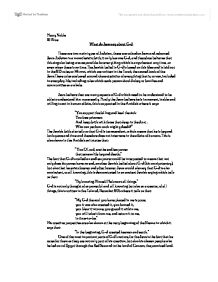 What do Jews say about God

Harry Noble 10 Blue What do Jews say about G-d. There are two main types of Judaism, there are orthodox Jews and reformed Jews. Judaism is a monotheistic faith, it only has one G-d, and therefore believes that this singular being was responsible for everything which is anywhere at any time , or even when there is no time. The Jewish belief in G-d is based on this idea and is laid out in the 613 rules, or Mitzvot, which are written in the Torah, the sacred book of the Jews.These rules are based around characteristics of everything that is, or was, included in everyday life, including rules which each person should obey or families and communities as a whole. Jews believe ther are many aspects of G-d which need to be understood to be able to understand him more easily. ...read more.

Jews would also say that G-d is also omniscient, or all knowing, this is demonstrated in an ancient Jewish saying which tells us that: "By knowing Himself He knows all things." G-d is not only thought of as powerful and all knowing but also as a creator, of all things, this is written in the Talmud, Berachot 60b where it tells us that: "My G-d the soul you have placed in me is pure; you it was who created it, you formed it, you blew it into me, you guard it within me, you will take it from me, and return it to me, in time-to-be." His creative properties are also shown at the very beginning of the Shema in which it says that: "In the beginning, G-d created heaven and earth." ...read more.

known as the 'Days of Awe' "On the first day of the year it is written, and on the Day of Atonement the decree is sealed ... who shall live and who shall die ... who shall perish by fire and who by water, who by the sword, who by wild beasts ... But penitence, Prayer and Charity avert the severe decree." Penitence, or forgiveness, means that the subject does not only have to say that their repent their sins, but also they have to mean it and be humble before G-d, this also links in with Jews not being able to say G-d's name, 'Jehovah', and some orthodox Jews also refuse to say or even write the word 'God' because it may be desecrated or used incorrectly at a later date, this is the reason I have written G-d for this essay. ...read more.