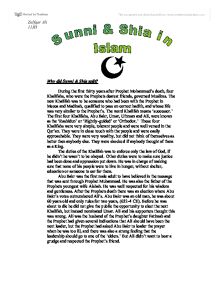 Why did Sunni &amp; Shia split?

Why did Sunni & Shia split? During the first thirty years after Prophet Mohammed's death, four Khalifahs, who were the Prophets dearest friends, governed Muslims. The new Khalifah was to be someone who had been with the Prophet in Mecca and Madinah, qualified to pass on correct hadith, and whose life was very similar to the Prophet's. The word Khalifah means 'successor.' The first four Khalifahs, Abu Bakr, Umar, Uthman and Ali, were known as the 'Rashidun' or 'Rightly-guided' or 'Orthodox.' These four Khalifahs were very simple, tolerant people and were well versed in the Qur'an. They were in close touch with the people and were easily approachable. They were very wealthy, but did not think of themselves as better then anybody else. They were shocked if anybody thought of them as a King. The duties of the Khalifah was to enforce only the law of God, if he didn't he wasn't to be obeyed. ...read more.

the prayer when he was too ill, and there was also a strong feeling that the leadership should go to one of the 'elders.' But Ali didn't want to bear a grudge and respected the Prophet's friend. Umar was Khalifah from 634-44 CE. A Persian slave who took revenge as Umar was preying murdered him by stabbing him six times. Before his death three days later, Umar appointed a six-man committee to elect the next Khalifah. The khalifate was offered to Ali first, on the condition that he accepted the previous Khalifahs, but he refused this. The Khalifate was then offered to Uthman who accepted all the conditions. He ruled from 644-56 CE. He was killed by a group of Egyptians, while he was at prayer. After 24 years from the Prophets death the khalifate passed to Ali. He ruled from 656-61 CE. How are they different now? ...read more.

They believe the first Imam was Ali and his powers passed on from father to son until the last Imam, Mehdi. The Shia group that believes in the seven Imams believes that the last one disappeared in AD 880 and will come back to restore justice on Earth. Muharram is an important day for Shia Muslims as it marks the day when the Prophets grandson Hussein was martyred. There normally be religious gatherings and some beat themselves with chains and cut themselves with swords to share what Hussein had suffered. Sunni Muslims rule Major Arab nations like Saudi Arabia, but things are starting to change as now Iran is the main home for the Shia and is rapidly increasing in strength in Pakistan, India, the Yemen and the Lebanon. The number of Shia Muslims today is rising as people in many developing countries are reacting against the decadence of the modern world. Many of them are very strict Muslims. Most Shia Muslims are ready to give up their life in fighting for what they think is right. ?? ?? ?? ?? ...read more.